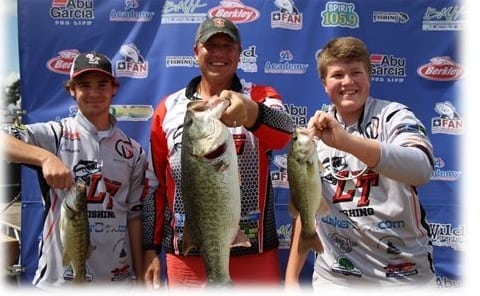 Sixty teams arrived at Llano County Park on a early warm and muggy Saturday Fall morning to seek those important points and begin the Chase for the Championship with over $6,000 in scholarship funds and the coveted Berkley Anglers of the Year Award up for grabs.  After the pre-launch prayer, national anthem and safety check the 120 anglers and their captains took off to put their skills and strategies to the test on the recently filled Lake Buchanan reservoir.

Taking the win and the points in the first qualifier was the team of Parker Wagner and Cameron Reagan from Lake Travis High School with 13.84 pounds including the Kistler Big Bass at 7.69 pounds. “My dad and I had never fished on the lake before, so we decided that we should pre-fish the lake and get an understanding of how the lake looks and fishes,” Wagner said.  “While pre-fishing we spent most of our time in the submerged timber and had an extremely hard time catching fish; we only caught two fish in two days of fishing.

Tournament day we put what we learned to good use; if they aren’t in deep trees, they might be in shallow rocks,” Wagner continued.  “Early morning we caught a keeper on a senko on a shallow flat of rocks. We knew we needed to turn this bite into some sort of pattern, so we continued to throw senkos on the flat and caught a few more fish. We had found a pattern, and used google images to find structure similar to what we had caught the fish on.

After the senko bite slowed down, we switched to baby brush hogs and caught a few more fish on our pattern. Near the end of the tournament we had four small keepers in the live well and knew that we needed a bigger fish to have a chance to place. We went farther north up the lake and an hour and a half before the end of the day we were fortunate enough to set the hook into an 8 pound bass.

This tournament I learned how to find and fish a pattern, the importance of learning a lake before fishing it, and that you never know when you can catch a big one. I would also like to take a moment to thank Faith Angler Network for hosting the event and all of our sponsors for making these events possible,” Wagner added. 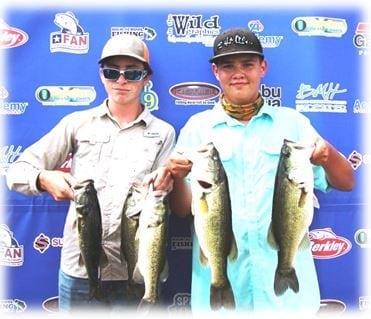 Earning the second place spot was the team of Tanner Patterson and Alex Cantrell from Bowie High School with a 11.15 pound limit of bass.  “We started off in a cove throwing top waters and didn’t have much luck,” Cantrell said.  “We moved to an area with some rocks and switched to jigs. Tanner’s grandfather, our Captain – Bob Schernik – a resident of Lake Buchanan, knew of some areas on the lake and we moved around and threw some jigs later in the morning and that is when things started to happen.”

Patterson caught four fish, two of the largest ones, back to back. “We saw a fish jumping and Alex was able to throw a spook on top of it and caught our fifth fish,” Patterson said.  “We both just did what we know and love to do and gave it 110%. As freshman, we are happy with our finish and excited to be a part of the Faith Angler Network!” 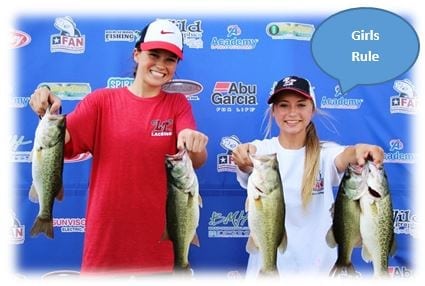 Coming in third also from Lake Travis High School was the team of Abbi Gass and Anna McDonough with a five fish limit weighing 9.13 pounds.  “Saturday was a blast! Some of our main winning strategies would be practicing and pre-fishing and just getting the right mindset for the tournament throughout the week/weeks before it,” Gass and McDonough said.   “Also, before tournaments I pray and just give all the glory to God and that keeps me encouraged to try my best, as well as, keep a happy attitude whether I do good or bad!

Throughout the tournament if a technique doesn’t work I try and brainstorm with my uncle about more spots and baits and colors that might work to get some fish in the boat.

I love you guys and the spirit y’all carry! It’s amazing to see the love all of you have for God and see you all acting out and doing these tournaments for us through your faith. The tournaments are always so great and organized and all the people are so nice and encouraging; It’s so incredible and I’m happy to be a part of it,” the duo added.

They each won a large Berkley PowerBait Tackle Bag and a pair of third place trophies.

This event would not be possible without the volunteers and staff that put everything together from helping check in, set up, cook hotdogs, launch boats, park trucks to helping with merchandising and getting it all back into the trailer. Thank you sincerely: Justin Rieger, Mary Anderson, Colt Anderson, Doug, Valerie and CJ Cruts, Jon Sigman, Stephanie Cook, Ruth Hale, Dave Denson and the many others that jumped in to assist.

Captains are essential to the success of our High School Fishing program and we are honored to be able to recognize them with some great sponsor products and incentives.

We would like to thank all of our 2016/17 Sponsors and Supporters and ask that you give them a chance to earn your business when the opportunity arises.