A mild but damp Saturday morning greeted over 114 student anglers and their captains for the final qualifying event of the 2016-17 FAN HSF Series at Jones Brothers Park on Lake Travis. This would be their last chance to make the cut and a chance to compete in the NO Entry Fee Chase for the Champions with over $6,000 in scholarship and prize on the line.

Cameron Clouse and Tara Reid from All Round Anglers win the final qualifier with a five bass limit weighing 16.37 pounds and their first win of the season. 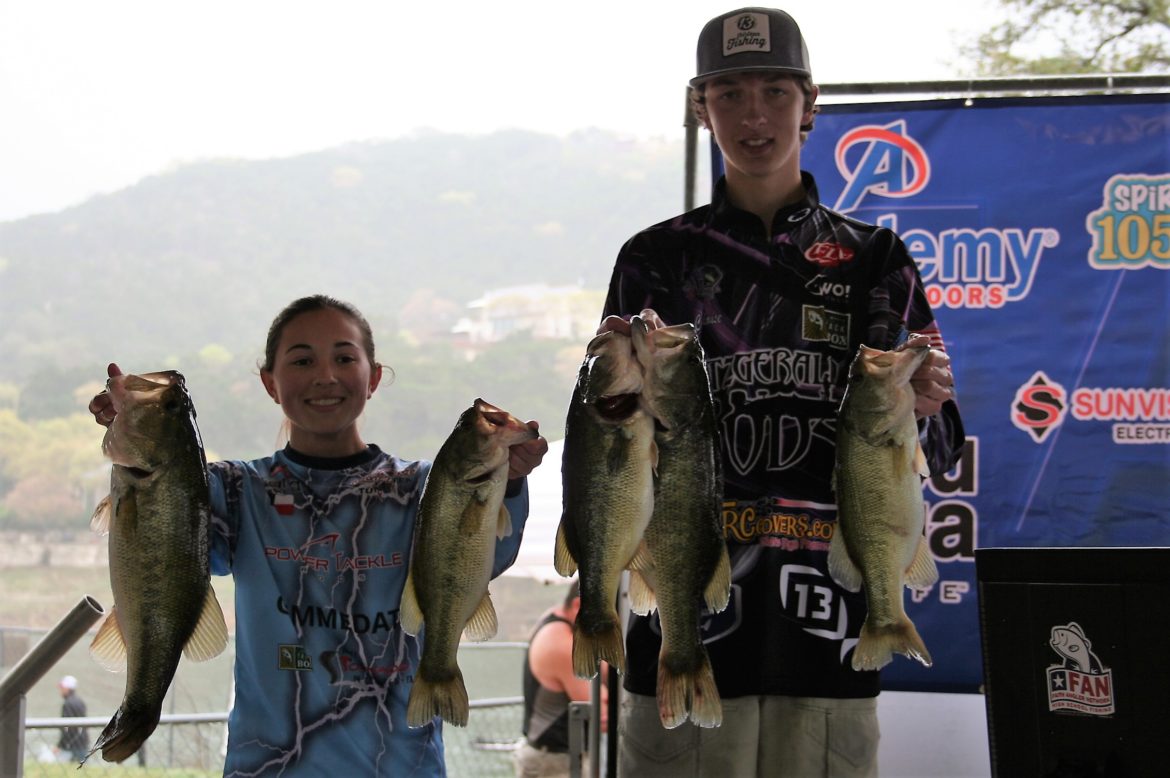 For All Around Anglers team, Cameron Clouse and Tara Reid, this just happened to be their first win.  What a great day they had fishing the third FAN High School Tournament on Lake Travis. “When we showed up at the ramp that morning, we discussed what we wanted to do since we hadn’t had a chance to pre-fish this lake” stated Cameron Clouse.   “We spent most of our day near the launch area.  We started out in a cove nearby and caught our first small one on the point.  We headed into that cove fishing in the 8-12 foot depth range throwing a Texas rig into the brush where we caught fish number two, 3 pounder, near a dock.  Shortly after that we caught the third fish, 5 pounds, blind casting to beds.  Then things slowed down so we moved to another area where there was a chunk rock bank and caught two more small fish” stated Cameron Clouse.
“With about 40 minutes left in the tournament we knew we needed to pull it together and catch two more really nice ones.   We fished as hard as possible and ended up culling a 1 pounder for a 4.5 pounder in the last 20 minutes and a 2 pounder for a 3 pounder on one of the last few cast.  It showed me once again how excited and happy fishing makes me” stated Tara Reid.
Both Cameron and Tara stated, “They have enjoyed fishing the FAN High School Tournament trail and look forward to more.  We appreciate all that the staff does to make each tournament a wonderful experience.  We are happy to be able to say we took first place in a FAN tournament.”
We both want to thank all our sponsors.  Cameron would like to thank Fitzgerald Rods, 13 Fishing, TRC Rod Covers, Crossed Industries, WOO Tungsten, Mystery Tackle Box, Berge Tackle and Tricked Out Marine.  Tara would like to thank Power Tackle Rods, Mystery Tackle Box, Gimmedat Outdoors, Eco Pro Tungsten and Hags Tornado Baits.
Lastly, they would like to thank Preston Danna, our captain, and our family and friends and most of all God.

Finishing second place and representing Rouse High School was the team of Kris Green & James Mills with 15.38 pound including a 5.77 kicker bass with Captain James Green. 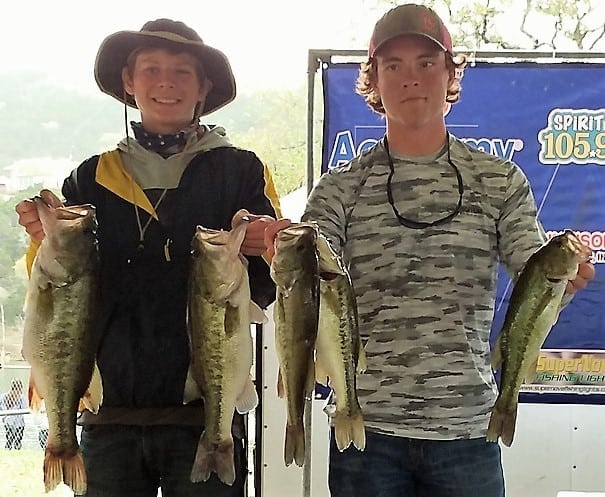 As the day went on the bites slowed and as it hit about noon we were  faced with the decision to move or stay. We decided to stop on the spot that produced the 4 and the rest of our limit. When James reeled down and cracked a bass and his rod immediately doubled down, as soon as the bass showed its self we knew that it was our kicker. The bite picked back up and we culled a few of our smaller keepers.“We started the day off at a cove that has produced the bites in previous fishing trips. In the morning, we started off throwing top water and a wacky rig we got the first keeper early on the top water”. Stated Kris. As we worked down the bank to the first point we noticed a school of bass chasing bait on the surface after we caught about 15 fish we soon realized that the school was filled with undersized bass. We ended up making a hard decision to leave the biting fish and move onto the juice ( their hot spot).  As we showed up to the juice we pulled 3 average size keepers and a four pounder throwing a weightless fluke in deep trees.

We would like to thank the FAN for organizing this tournament trail and giving high school anglers an opportunity to pursue what we are passionate about. It is very nice to have a crowd of supporters.

They each won a Abu Garcia Black Max reel and a pair of third place trophies. 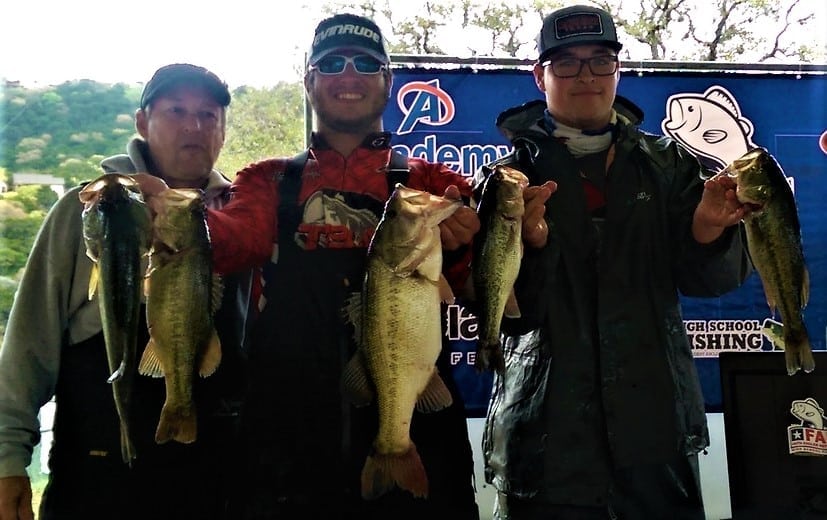 After me and James launched our boat and parked it, we tried to get our outboard engine started so we can make a run up a big creek. After several tries by both of us and our boat captain, Lance Hale, the engine would not even try to turn over so we hopped on the trolling motor and started fishing right next to the boat ramp .A couple of casts into the day James hooks up with a two pound bass on a Gary Yamamoto Senko. then a couple of cast later I hooked up with a two pound bass on a Pop-R. About 20 minutes later a four and a half pound bass crushed my top water next to a dock. We picked up a few more small keepers on top waters and Senkos and had our limit by 8 o’clock in the morning and we haven’t moved 100 yards from the boat ramp. After venturing out as far as our trolling motor would take us we went down the bank some and went to the other side of the cove. After finding very few keeper fish in those places we headed back to the creek next to the boat ramp and culled twice by flipping brush hogs. We had a couple of fish shake us off that would have culled out some of our fish. James hooked into something big that was peeling drag and pulling hard but broke off, we think if it was a bass it would defiantly have gotten the big bass award. We decided to weigh in an hour early so we can get our boat on the trailer without the motor so others would not be waiting on us when their pulling their boats out. Even though we weighed in an hour early we still fished more than the rest of the competition because we started fishing during takeoff and didn’t waste time running our boat to places so we fished in one spot for 6 1/2 hours. 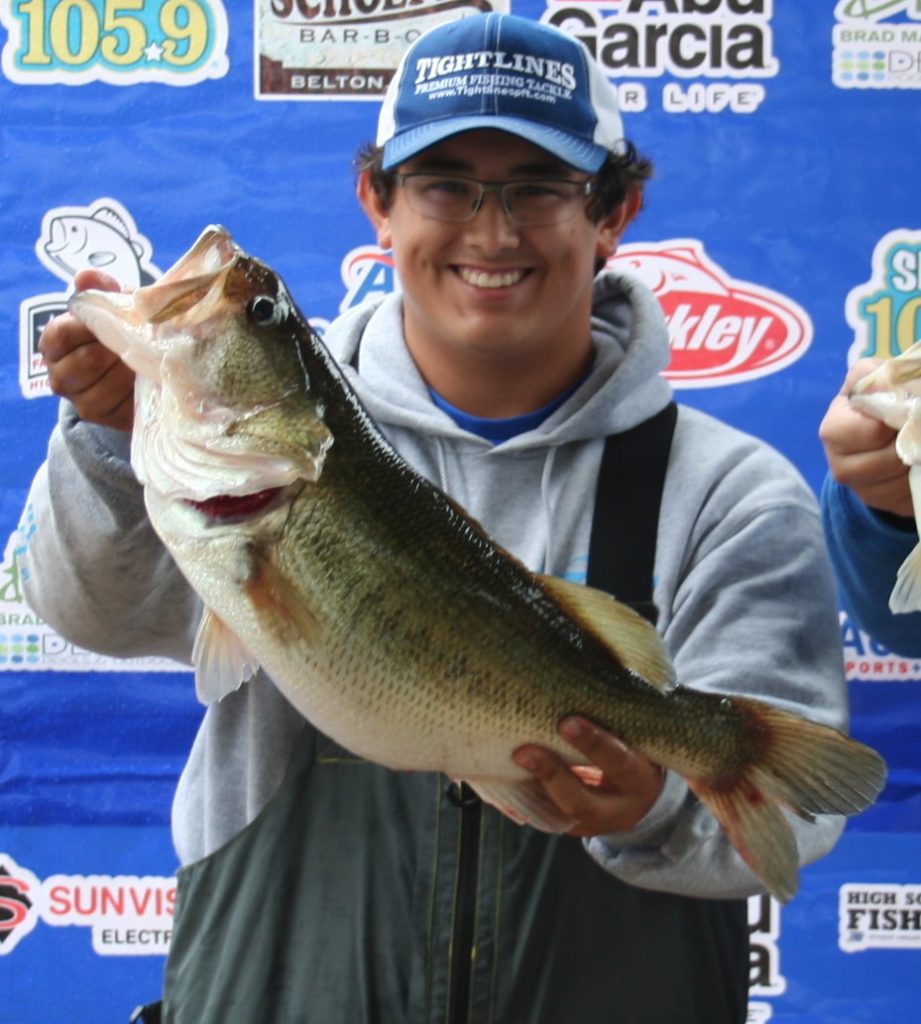 I think the FAN High School bass tournaments one of the best and most established high school tournament trails out there. I have never seen a tournament run as well as they do. From launch to weigh in it is a fun experience to be a part of.