It’s a long drive from Arizona to Seneca South Carolina but the trip home is going to be a little sweeter for Shane Edgar and his partner Frankie Mueller who captured Sundays TBF/FLW High School Fishing National Championship on Keowee Reservoir. The talented duo brought in a 5 bass limit that weighed in at 9lbs 13oz to edge out local hometown favorites Carter McNeil and Tucker Smith from Abbeville High School, who also had a 5 fish limit, by a mere six ounces to win the coveted crown and a $10,000 dollar College Scholarship. 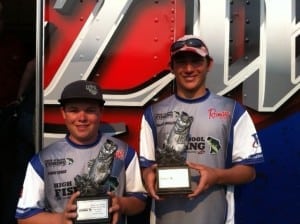 The setting for the event could not have been better with the FLW Tour event expo set up at the Seneca Wal Mart with capacity crowds who enjoyed not only the FLW Tour and the excitement of some of the country’s finest professional anglers but also the FLW College Fishing National Championship, The High School National Championship and the Anderson Open High School open tournament at nearby Lake Russell. Needless to say Northwest South Carolina was the epicenter of tournament fishing this weekend!

Rounding out the 5 team high school field was Cameron Mattison and Chad Poulsen from Airline High School in Shreveport Louisiana who had 3lbs 10oz to finish third. Kaleb Seeger and Jake Satterbak from Maple Grove High School in Minnesota brought in 2lb 6oz to finish fourth ahead of Corey Horelick and Austin Bestwick of the Ella T. Grasso Southeastern Technical School in Connecticut.

“I was really kind of surprised when we took the lead” stated Edgar who also won the TBF Junior National Championship when he was 11 years old. “I knew the team from South Carolina was the team to beat and I knew they had a limit of fish also but I had convinced myself that they had a heavier sack then we did” added Edgar.

“We used a drop shot to catch all of our fish today. We had found some fish in the trees during our pre-fishing time but that all changed when the rain quit and the sun came out. We switched our approach to fishing various docks and that was the answer for us today” commented Edgar. When asked what the key to their success was today Mueller quickly pointed to the fact that they caught all of their fish on the shady side of the docks in less than 15 feet of water. ‘The bass didn’t want any part of that bright sun” stated Mueller. “It was almost a waste of time to even fish the sunny side of the dock as they just were not there”.

The ride home certainly isn’t going to be any shorter but it will most definitely be a little sweeter for the smiling pair and their families’ who all made the trip across the country to support the winning team.

The 2015 High School National Championship will see the field expand to 20+ boat fields as the state championships’ and regional events will now advance a percentage of each field to support and reward teams for helping grow high school fishing across the country.

Go to Highschoolfishing.org for more information on how to get involved in high school fishing.