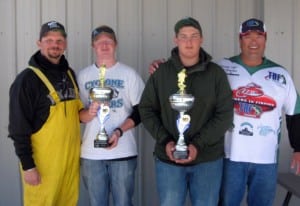 On one of the coldest and wettest days Colorado had experienced in months, Cody Crump and Matthew Mason representing the Cyclone Anglers from Pueblo West High School emerged victorious. With constant heavy rains and strong wind out of the north Crump and Mason caught three keeper bass that weighed 6lbs 8oz, which crowned them as the 2011 Colorado High School Fishing State Champs and also won them bragging rights for bringing in the tournament’s Big Bass. The duo used spinnerbaits in a “secret color” on rocky points to bring in the majority of their fish.  After the last team had weighed in the team exclaimed, “This is awesome! We are still shaking, but we stuck to our game plan and now we can’t wait to represent Pueblo West High School at the High School Fishing Western Regional Championship!” 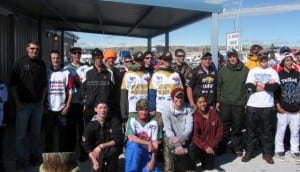 The team thanked the TBF and encouraged other high school anglers to, “Get involved in your local high school SAF program, keep fishing even when it’s tough and just never give up!” Additionally, they wanted to thank our parents, the Pueblo West High School SAF program, all the PWHS Cyclone Anglers, and Sam Heckman the TBF Youth Director and Tournament Director for this event.  The team also thanked their boat captain, Steve Spock, who’s been a great fishing mentor and teacher at Pueblo West High School.

Second place went to the team of Chris Wittle and Michael Harpell representing the Fossil Ridge High School Sabercats who brought two bass to the scales weighing in at 4lbs 5oz.  Third place went to the Windsor Wizards High School team of Josh Villa and Cameron Mills. They also weighed in two keepers for a total of 3lbs 2oz.

All teams who entered and competed at this event, if still eligible, will be qualified to fish in the largest event in high school fishing, the 2012 High School Fishing World Finals (at no extra cost), to compete for thousands in college scholarships and prizes. Additionally, it is open to any and all high school fishing teams who would like to come and compete. If you are not SAF members, you will just need to pay a $50 team entry fee. For more information regarding the HSFWF, please visit our HS Fishing World Finals page on HighSchoolFishing.org.

TBF and SAF would like to thank the entire Colorado Bass Federation including Youth Director Sam Heckman as well as all of the volunteers who helped make this event happen. And a huge thank you to all the parents, mentors, teachers, coaches and boat captains for getting your students involved with high school fishing! Thank you all! 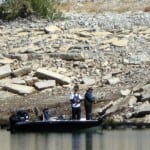 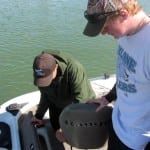 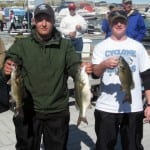 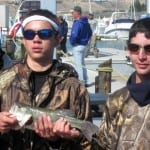 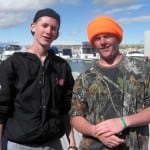 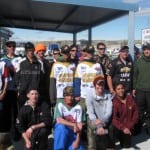 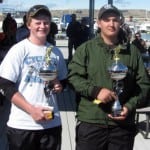 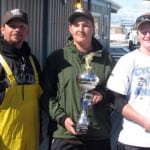 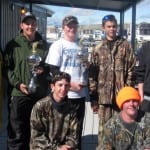 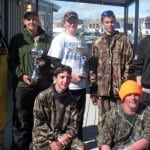 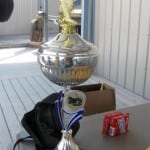 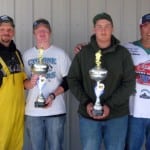