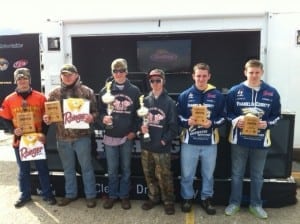 Tristan Jordan and Don Taylor from Corbin High School only brought in four Lake Cumberland Bass to the Conley Bottom Marina weigh-in scales but their 11lb 11oz bag topped a 70 boat field to win the Kentucky SAF High School State Championship .The two talented anglers had a 3lb 10oz Smallmouth kicker that helped them top the duo of Colton Smith and Brenton Clemons of Southwestern High School who had a five fish limit that tipped the scales at 10lbs. 9ozs. Smith and Clemons have had a pretty impressive month themselves as they won the Florida Open, finished ninth in the Anderson Open in South Carolina as well as claiming the runner-up spot in this event in their home state of Kentucky.

They edged out Jacob Moore and Cameron Thompson of Franklin County who also had a four fish sack that weighed in at 10lb 7oz to finish third.

“We caught almost all of our fish today on a Red Wiggle Wart” stated Tristan Jordan. ‘We made a long run to start the morning and then worked our way back to the marina and the middle of the lake” added Taylor.

“We actually caught most of our fish along a high rock wall fairly close to the marina and the surprising thing is we caught them all in the last 30 minutes of the tournament” quipped Jordon who also credited their tenacity in not giving up as the key to their win.

Big Bass of the event went to the last fish weighed in during the contest and that was the team of Josh Boone and Brian Oliver of North Laurel High School who brought in a 3lb 15oz smallmouth beauty to claim the Lew’s Big Bass award for the event.

In addition to winning the event Jordan and Taylor also claimed the Georgetown College $2,000 scholarship prize and the Booyah Big Bag award. The top three teams all qualified for the FIshidy one year subscription.

The TBF/FLW State Championship and Open series continues its trek across America with upcoming events in Illinois, Virginia and the Grand Lake Open in Oklahoma in the coming weeks.