The Battle on Balboa

To The Georgia SAF State Championship 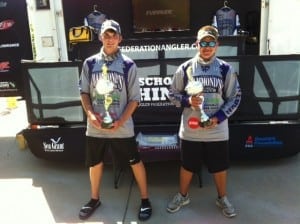 Cole Cloud and Ronnie Warsop put together an impressive five bass limit that weighed 17lbs 13oz to win the Georgia High School State Championship on beautiful Lake Lanier in Northeast Georgia. The convincing win propelled the duo to the Southeast Regional in September as they will lead five teams who qualified from the event on Saturday.

The pair of juniors anchored the winning bag with the Lew’s Big Bass award, a 4lb 11oz toad that carried them to the victory and a pair of terrific Lew’s Reels for their efforts.

“We are very excited to be moving on to the regional” cited Cloud. “We used Jerk Bait early in the morning to get things started and then switched to a Carolina Rig to try and catch some bigger fish later in the day” added Warsop. “We ended up culling 4 different times today but we weren’t sure if we had enough weight to win it” added the smiling pair. “We figured we had around 15 lbs. but we really didn’t know if that was going to be good enough to win”.

Not far behind was the team of Tristan Melton and Cameron Hudson of Dawson County High School who will also advance to the regional with an equally impressive sack that tipped in at 16lbs 3oz to finish second in the 52 boat field that launched from the terrific facilities of Laurel Park in the city of Gainesville. Right behind them was the team of Mathew Jones and Eli Huggins of West Forsyth High School who had five Lake Lanier beauties that weighed 15lbs. 11oz. to finish third. 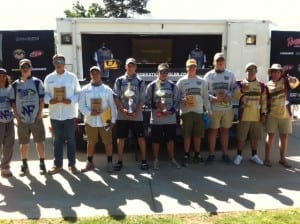 Rounding out the five qualifying teams were the 2013 defending State Champions Luke Slayton and Branson Marks also of North Forsyth who had a five fish limit the weighed 14lbs. 7oz to finish fourth.  Noah Pescitelli and Westin Sachs of Mill Creek High School also had five fish that weighed 13lbs. 5oz to grab the fifth and final qualifying spot for the fall regional.