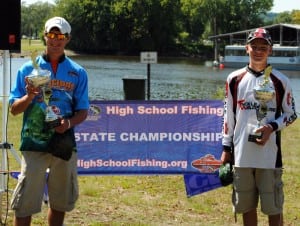 With the river conditions changing dramatically, having dropped five feet in the last two weeks fishing was tough. But beating the tough bite, Kyler Chelminiak of Whitnall High School and Nicholas Peterson of Lakeland High School brought in a limit of bass that weighed 13.23 lbs to be named the 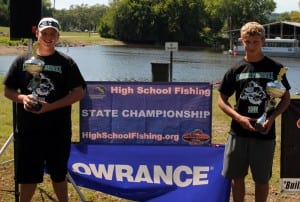 Wisconsin High School Fishing State Champions. Kyler and Nicholas were also the highest finishing Certified Student Angler team and were awarded with a bag of fishing equipment from the Wisconsin Bass Federation. The team also caught the big bass, which awarded them a Rod and Reel combo that was donated by Cabela’s of Prairie du Chien. The state champs  started morning fishing zara spooks in balls of shad that the bass were feeding on, then fished Lilly pads and duckweed with Mann’s Super Frogs and Frankentoads. Kyle was the 2009 WI Bass Federation junior state champion and is currently the 2011 WBF junior champion. “I would like to thank his sponsors – Mann’s Bait Company, Uncle Josh, Ironclads, Brovarney Baits, Denali Rods and the Spring Lake Inn,” Kyler stated. This was Nicholas first ever fishing tournament.

Wisconsin 2nd place team was Ronald Waite and Kason Morley of Adams Friendship Green Devils. They brought in 5 bass that weighed 12.5 lbs, just ¾ of a pound from the state champions. 3rdplace team was Matthew Zingler and Luke Emery of 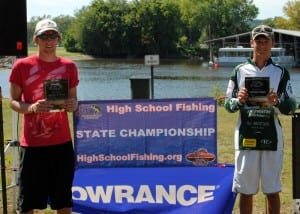 Alex Steffes and Drew Rodgers of Kennedy High School in Iowa, were named the Iowa High School Fishing State Champions. They also brought in a 5 fish limit weighing 9.09 lbs. Iowa state champs caught most of their fish on a frog in Lilly pads and duckweed. Both state champs were awarded beautiful trophies and a Cabela’s gift bag.

Teams who entered and competed at this event, if still eligible, will be qualified to fish in the largest event in high school fishing, the 2012 High School Fishing World Finals (at no extra cost), to compete for thousands in college scholarships and prizes. Additionally, it is open to any and all high school fishing teams who would like to come and compete. If you are not SAF members, you will just need to pay a $50 team entry fee. For more information regarding the HSFWF, please visit our HS Fishing World Finals page on HighSchoolFishing.org.

A unique feature of an SAF sanctioned event such as this is the “angler testing/Certified Student Angler” component. Anglers were given the opportunity to take a free online test at HighSchoolFishing.org about boater safety, conservation and angler ethics, which made them eligible for contingency awards at their state championship. “It’s an industry first by TBF and a tremendous way to emphasize the importance of education to these student anglers,” TBF Youth Director Mark Gintert commented. “The Federation is driven by our desire to promote education through fishing and the testing component is designed to do exactly that. Put this package together with our partnership with FLW Outdoors and the sky is the limit.  These young anglers will have opportunities unlike anything the industry has ever seen.”

TBF and SAF would like to thank Mike Simonds, president of the Wisconsin Bass Federation, Adam Barnard, WI Youth Director, Cabela’s, City of Prairie du Chien and all the volunteers who helped make this event happen. And a huge thank you to all the parents, mentors, teachers, coaches and boat captains for getting your students involved with high school fishing! Thank you all! We couldn’t do this without you. 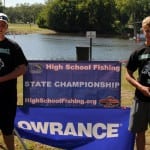 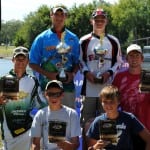 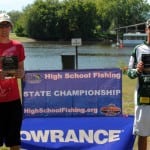 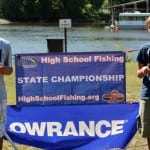 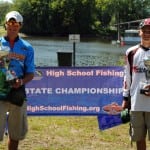