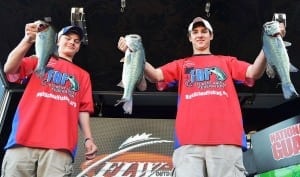 “I used one bait and one rod, actually it was a flipping rod, to catch all my fish,” Chelminiak said. “It was slow all day long. We only got one bite every two hours.”

“We were flipping in heavy milfoil all day, Peterson added. “We were just lucky to get the big bites that we got.”

Best of the rest 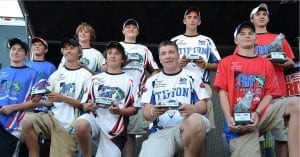 Winning teams from each of five regional championships advance to the 2012 High School Fishing National Championship for a chance to win a $10,000 scholarship ($5,000 to each team member).

TBF along with FLW Outdoors held the high school tournament in conjunction with the FLW College Fishing Central Regional.

FLW Outdoors is the best in fishing, on and off the water. Anglers worldwide can compete for millions over the course of 191 tournaments in 2011. FLW Outdoors has taken fishing mainstream with the world’s richest fantasy sports game, FLW Fantasy Fishing presented by Straight Talk, where competitors can play for free as well as sign up for Player’s Advantage to gain an edge. For more information about FLW Outdoors and FLW Fantasy Fishing, visit FLWOutdoors.com or FantasyFishing.com.