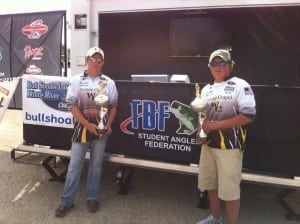 Austin Holcomb and Blake Potter of Watson Chapel high School had never fished in the pristine clear waters of Bull Shoals Lake until Thursday morning when they pre-fished the beautiful mountain lake formed by the White River in Northern Arkansas. But rather than try to do something they were not familiar with, the pair of Juniors went to work trying to find some “Dirty” water that was similar to the area they live in around Pine Bluff. Once they found those conditions the talented pair did what they like to do best and worked a variety of crankbaits to perfection to win the 2013 Arkansas State High School Bass Fishing Championship.

The Pair’s winning weight of 14 lbs. 2 oz. topped the 75 boat field and also enabled them to catch over 50 fish for the day.

“We made about a 25 minute run first thing this morning and we started catching fish at our very first spot” stated Blake Potter. “We had a limit of fish by 8:15am and probably caught at least 5 or 6 limits of keeper fish today added Holcomb. “It was just a terrific day of fishing for us all the way around”.

Finishing in second place was the brother combination of Jake and Josh Dugger from Pottsville High School who also had a limit of fish that weighed in at 13 lbs. 5 oz. 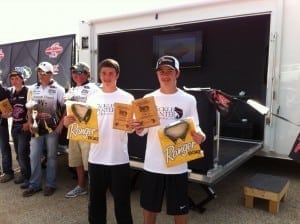 Carter Kaiser and Clayton Starken of Highland finished just behind in third with a limit of fish that weighed in at 12lbs. 13 oz.

Overall 45 of the 75 teams brought a limit of Bull Shoals Bass to the scales with a nice variety of largemouth, smallmouth and spotted bass filling up the Release Tank provided by Arkansas Game and Fish and the state’s top black bass biologist Colton Dennis who was on hand to assist the anglers with taking care of their catch.

Holcomb and Potter will represent the state of Arkansas in the October Central Conference Regional championship which will be held at Lake Texoma.

The SAF championship series continues its nationwide trek this weekend with the Illinois SAF State Championship on Clinton Lake.