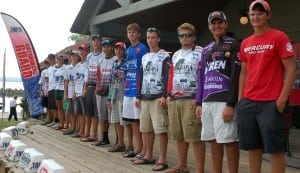 The fishing continued to be tough on most teams in day two of the 2012 High School Fishing World Finals. But, the late bite seemed to be key for a lot of the teams making the final cut to fish tomorrow on Lake Dardanelle near Russellville, Ark. The weights zero tomorrow, which levels the playing field for all seven teams.

Three 2012 SAF State Champions make up the top seven, as well as teams who have made the finals before plus a new team from the state of Texas. 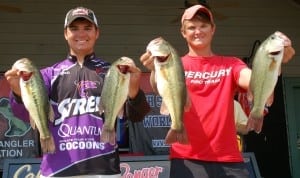 Finishing in first place after day two was Ralston Lusby and Jonny Schultz of Little Rock, Ark. They picked up a limit again today that weighed 15 lbs 2 oz, which launched them into first place overall. Yesterday, the team had 12 lbs 6 oz, making their two day total 27 lbs 8 oz. Their consistency paid off and are launching as boat number one in the morning. “Today we had a pretty good day, we had 15 lbs. Yesterday we had 12 lbs, so it’s been pretty consistent,” said Schultz. “We had a late bite today, we didn’t have a keeper until about 12:30. We feel like we’ve been catching them all week, and should be able to do it again tomorrow.”

Local sticks Sawyer Grace and his partner Austen Cathcart of Russellville High School, with the help of Sawyer’s brother Spencer as their boat captain, fishing with the Dover High School Fishing Club, landed the big sack of the tournament by weighing a monstrous limit that weighed 18 lbs 4 oz! Their two day total was 24 lbs 14 oz, after only having 6 lbs 10 oz and 29th place yesterday. The finished in 2nd today, making them boat #2 tomorrow. 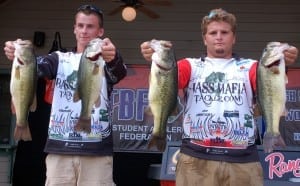 Grace & Cathcart landed two beauties that weighed over 4 pounds each. Their biggest bass weighed 4 lbs 10 oz, 5 oz short of the daily big bass award. “We literally went all day without a single bite. In the last hour, we pulled up to the last spot, throwing a spoon. It was one every cast and even lost a 6 lb’er that would have put us in the lead, but we had 18,” said Grace. In the inaugural World Finals, Sawyer and Austen made top 7 and finished third overall. Last year, they were in the hunt, but didn’t have enough to make the cut. “Tomorrow, it’s hard to tell. We might not have a single fish tomorrow, the then again, we might have 20 lbs. The potential is there.”

Yesterday’s leaders Nesterenko and Purifoy of Little Rock Christian fell short of a limit today, but had enough to make the cut after their lead yesterday. They had 8 lbs 1 oz today, to make a two day total of 24 lbs 9 oz. “Today we went out and caught our fish early. Yesterday we didn’t catch ‘em early, so we thought we’d have a way better start. We went out and started flipping, caught a keeper and caught 4 fish by 10 o’clock,” said the team. “If it’s windy tomorrow, maybe we can get ‘em. We’re gonna gamble a little bit.”

Newcomers and 2012 Oklahoma State Champions Trevor Yates of Norman and Wyatt Smith of Depew, Okla. won their state on Ft. Gibson Lake just two months ago. Yates and Smith had a decent day yesterday which kept them in the game. Today, they made a statement and weighed in 14 lbs 2 oz, which gave them a two day total of 24 lbs 7 oz, finishing them in 4th place overall. “It started off decent; we caught a few fish right off the bat and it slowed down till about 1 o’clock and then it caught on again. We were catching them back to back,” said the team. 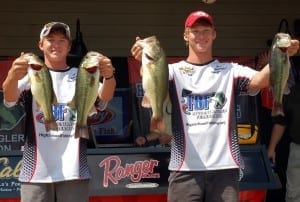 2012 Arkansas State Champions TJ Miller & Devin Baxley of Greenbrier, Ark. are no stranger to this game. They were crowned Champs on the Arkansas River near Little Rock in May. Last year in the World Finals, they also fished the top 7 and finished 4th overall. They have been in the hunt and are on fire this year. Today, they weighed in 14 lbs 5 oz, making their two day total 24 lbs 4 oz. “Tomorrow we plan on going out and hopefully catching them early, rather than worrying ourselves like we did today. We had boat problems today so that really got us down,” said Baxley. “We have what it takes to win this thing. To be the best in the state and now possibly the best in the world is unreal,” the team said.

The brother/sister duo, 2012 North Carolina SAF State Champions of Bandys High School, KJ and Chelsey Queen are making a statement, they came here to fish! Last year in their debut in the World Finals, they made top seven and finished third place overall. They were one of two teams to catch a limit both days this tournament. They had only 6 lbs today, but with their 11 lb sack yesterday, it was enough to put them in the top 7 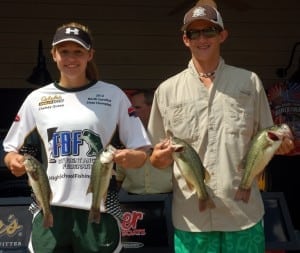 again, two years in a row. “Our day was tough today, it was barely enough to break through the ice. We just hope we can change our tactics and hopefully have a better day tomorrow,” KJ said. Chelsey graduated in May and will be starting college in the fall. They will fish again as a team in the Conference Championship on Lake Wylie in South Carolina this fall.

Rounding out the top 7 this year is a new team from Texas, Tyler Woods & Austin Forrester from Ft. Worth, Texas. “We are going to start off in one of our holes. We’ll be throwing jigs in the afternoon and frogs early in the morning. Hopefully we can do it,” said Forrester. “It’s really exciting to make the top 7,” he said. Tyler fished last year with a different partner. “We thought we’d have to catch about 11 lbs to make top 7, today we only weighed in 3 lbs 8 oz and we almost left because we didn’t think we made it!” said Woods. “We’re really glad we stuck around, it was a great surprise,” he said.

Tomorrow, the weights will be zeroed and the playing field will be leveled.  Weigh-in for the 7 finalists begins at 3 pm. The top 7 teams will be awarded with scholarships, trophies, plaques and prizes that they can use when going to college such as TVs, laptops, dorm refrigerators as well as fishing equipment and gift cards.

Bethel University, in McKenzie, Tenn., near the shores of the famous Kentucky Barkley Lake has stepped forward in a huge way once again.  They’re offering a $5,000/year scholarship, renewable all four years to BOTH world championship team anglers for the second year!  That’s a $40,000 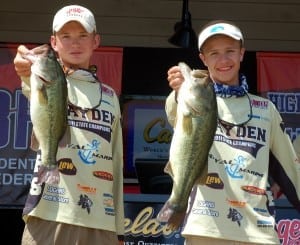 package just to start!  These anglers would get a top level education, as well as, spots on the Bethel University Collegiate Bass Fishing Team.  In addition, the HSFWF Champions will earn spots in the 2013 BoatUS/ACA Collegiate National Championship to compete against college fishing’s elite with use of a custom wrapped Ranger boat all week.

The Consolation Tournament we started last year, is back again. It is a unique consolation tournament that is for all teams who did not make the top 7. Both anglers PLUS the boat captain can fish in this first ever one-of-a-kind tournament. Just a small catch, the boat captain MUST catch his first fish of the day on a rod and reel provided by TBF, then he may use any of his own equipment the rest of the day. Each team will have a chance to weigh-in one bass, BUT they can also weigh-in one of any other species of fish they can catch! There is no limit to how many different species they can weigh-in, but the team who brings in the MOST species will win the Cabela’s Consolation Grand Champion Team prize.