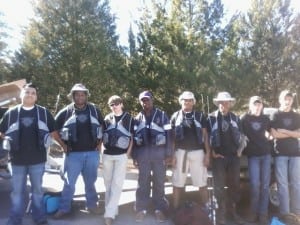 There were some Keeper Bass caught (14 inch min.) By Non- Tournament Participants from the Tifton BassBusters, but FFC member Jakyle Mckee caught one and took a Picture of it to verify the only Club member catch! Plaques were awarded Via a Team drawing. The Prize Raffle give-away was great and each Club Member had their ticket drawn for various prizes such as,a Frogg-Togg Rain Jacket, Lures, Sunglasses, Down-South Outdoors T- shirts, various lures and a BassPro Shop $50 gift card was given to one lucky Tifton BassBuster volunteer. Prizes provided(over ($400 in value) by Bobby Bennett (Down South Outdoors) and Gift card by Coach  Bruce Begue.

Begue said, ” These Young anglers are the pioneers of something Huge started in Tift County!They gained valuable knowledge about fishing competitively and gained some experience that will help them next time out. It takes a lot of patience and confidence in what you are fishing with to produce (catch fish) each time. Thats the difference in fishing versus catching.”   The Tifton BassBusters were very enthusiastic about helping the young anlers and look forward to assisting the High School in future events. Gary Kourtoy and Ed Newton along with Chad McMurrian demonstrated Skip- casting for the young anglers by the docks at the boat ramp after feasting on Hamburgers and hotdogs grilled by Coach Roy.

Other tournaments are a Regional Qualifier in March at Lake Blackshear. The State Tournament will be held in Gainesville, GA. in June at Lake Lanier. Students will be competing for College Scholarships worth up to $5,000 per year, to a college of their choice and fish on the college circuit while earning a 4 year degree. The World High School Finals will take place in Russelville Arkansas in July, where they will compete for $10,000 in scholarship funding .