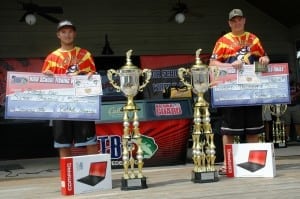 Chambers and Koon from the Arizona Bass Busters sealed the deal today with a sweet victory at the second annual, 2011 High School Fishing World Finals on Lake Dardanelle.

Both walked away with scholaship offers of $4,000/yr, renewable for up to four years totaling $16,000 a piece/$32,000 from Bethel University, spots on the Bethel University Varsity Fishing team, $500 Cabela’s gift cards, new Compaq laptops, plus some heavy jewelry and the esteemed Worlds Champion titles.  In addition the two anglers will represent High School Anglers nnationwide with an invitation to fish the 2012 ACA BoatsUS Collegiate National Championship out of a custom wrapped Ranger Boat! The team will compete right along side the top college anglers in the US!

Today the weights were zeroed for the final day of competition, making the playing field level and the weigh-in that much more intense.  With yesterday’s tournament leaders last to the scales and the largest tournament stringer just weighed, tension mounted as the scales turned the fates.  Chambers and Koon’s 19lb 8ounce stringer held the top spot and named the anglers all the way from Arizona the 2011 High School Fishing World Finals Champions.

“We went out looking for a good spot and we just got there and hit them up and within about an hour we had a limit of about 16lbs and by late afternoon we were culling three pounders,” Koon said.  “At the end of the day we weren’t doing 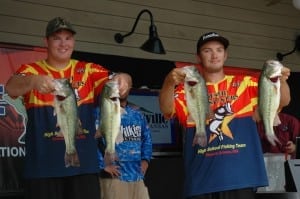 anything but hunting for the big fish, all the fish we were catching were 2 to 3lbs and they couldn’t do anything for us.” A slow start on day one with only 6lb 3ounces left the anglers a bit on edge.  “Well it scared me at first that first day, but second day we came out and it started out slow and then we found that spot and just hit them up hard,” Koon said.  “And then we knew; we knew we had a chance at it.”  “We weren’t too sure, I know I was nervous about it after the first day, the spots we pre-fished we were getting all kinds of fish and the first day we went to all those spots and we found very few fish at all.  It was making me kinda nervous about how we were going to do,” Chambers said.  Chambers and Koon came up short at last year’s contest with a second place finish and pounded them hard this week to claim those champion titles.  “It feels so great to win, even better to just go out there and have such a great day of fishing like that; I mean it’s just crazy that we won,”  Koon said.  “Yea, it’s awesome I don’t even know how to explain how it feels to have a great day of fishing like that and win what we did.”