On Saturday March 15, Eighty-Four teams of the very best High School anglers in Texas competed at the 2014 Texas High School State Championship on Lake Lyndon B Johnson just outside of marble falls Texas.  The anglers came ready to fish and the fish were ready to bite! Big fish were caught and records were broken.

These high school anglers racked up some stats at this event that would make most veteran adult bass fisherman drool. 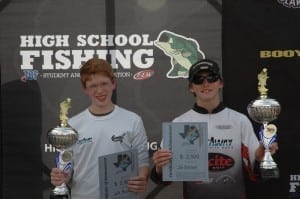 The 2014 Texas High School state champions was the team of Joe Beebe and Will Brady from the Woodlands College Park Cavaliers with a staggering 32.00 pounds in their five fish limit! That is the new five fish SAF national high school all time weight record! The anglers were a bit shocked at their own weight and beamed that they caught all their fish on babybass colored soft plastic stick baits in shallow water.  For their win the duo received $5000 in college scholarship funds ($2500 each) as well as advancement to the 2014 High School Fishing Regional Championship. 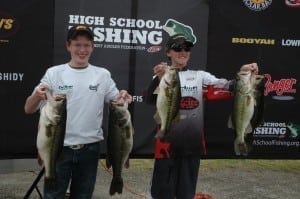 They were followed closely by several 20 pound bags. Finishing in second place with 23 pounds even was two anglers from the Angelos Anglers team of Tristin Riddle and Sterlyn Wood they also earned advancement to the regional championship and scholarship in the amount of $2500 ($1250 each), rounding out the top three was a team from Centex High School Basshunters, Justin Tatum and Stephen Shaw with 20-11.

Big Fish was a WHOPPING 10 pounds and 03 ounces weighed in by Dalton Dension and Nicklaus Langlois of the FAN High School Bass Team. 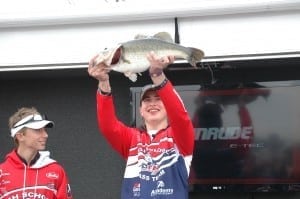 The top 10 percent of each high school state championship advances to the regional contest. Advancing for this event are 8 teams total including are the top 3 listed above as well as 4th place team Bo McGraw and Josh Perrin of Oak Ridge War Eagles, 5th Austin Ellis and Ben stripling from Marble Falls High,  6th was Wyatt Frankens and Clay Nash of the Corrigan Camden High School Fishing team, Hank Bostock and Calvin Burks also from the Corrigan Camden High School Fishing team and finally, Jonathan Moore and Anthony Menge of the ERA Hornets Bass Club.

Congratulations to all the anglers for a great job.