Colton Smith and Brenton Clemons had two big motivations to make the 14 hour drive from Somerset Kentucky to Clewiston Florida. The first was that it was snowing in Kentucky and almost too cold to fish. The second was that they just love to compete and are always looking for an opportunity to fish in a tournament somewhere! 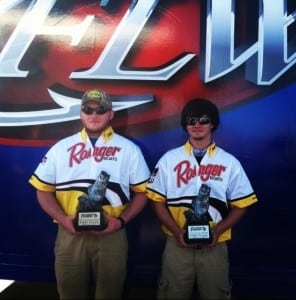 Sunday at the TBF/FLW High School Florida Open on the Caloosatchee River just off of Lake Okeechobee in south central Florida the two veteran anglers put it all together with a 5 bass limit that weighed 12 lbs. 6oz. They outdistanced the team of Travis Conrad and Hunter Tinsley from Riverdale High School who also had a 5 fish limit that weighed in at 11lbs. 2oz to claim the runner-up position. Rounding out the top three was the team of Shane Hines and Hunter Gadd from Bartow High School who had a very respectable 9lbs. 15 oz. The Bartow team was operating on a limited amount of sleep as their four team contingent fished another event on Saturday and then left at 3:00am to make the trip to the Alvin Ward Park in Moore Haven for Sunday’s event. That effort alone shows the true dedication of these High School teams across the country!

The top three teams from this event were then taken to the FLW Tour event in Clewiston for recognition just before the FLW Tour professional tournament weigh-in and a huge crowd that had filled the area. All three of these teams also qualified for the TBF/FLW Southern Conference Regional event that will take place this fall.

“This river is very different from our home lake in Kentucky” stated Colton Smith. “Our lake is very deep and rocky and this river has a little of everything in it from weeds to pier’s and docks and a lot of vegetation. We just tried to find areas that we were used to fishing and fish to our strengths” added Clemons. “In the morning we found some schooling fish that we threw crank baits at and then slowed down in the afternoon and started flipping worms around some of the canals and small ponds that are just off of the main river” added Smith who also stated that they caught around 20 fish during the course of the day. 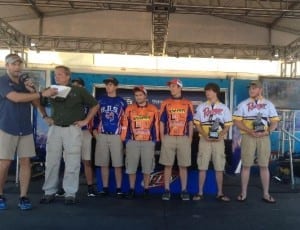 The TBF/FLW Open event series continues on March 8th and 9th at Lake Russell with the “Anderson Open” in Anderson South Carolina. These open events are available to all High School Students who can register and join the SAF by going to highschoolfishing.org and click on the yellow box that says “State Championship”. Simply scroll down to the state, find the open event and then across to where it says register!