Delawares Nanicoke and Wicomico Rivers was host to the Northern Conference High School Championship today with teams from Vermont, New York, Delaware, Maryland, Pennsylvania and New Jersey attending. Overall the fishing was good for the anglers as many limits were caught. Finishing at the top and winning the title of Conference Champions and advancing to the April 2015 TBF/FLW High School Fishing National Championship was the team of Kyle Harnak and Matthew Christopulos from New Jersey. 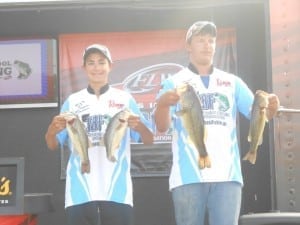 They weighed in 5 fish for 11-01 and while all wins are special, this one was the stuff that fish tales are made of! The second place team of Brandon Wells and Ethan Johnson from St. Johnsbury Academy Hilltoppers High School in Vermont weighed in 5 fish for 9-02 and held the lead for most of the weigh in. But when it is your turn to win, it is your turn to win and while almost every boat in the event fished right past the weigh in trailer at some point in the day, the eventual winners, Harnak and Christopulos, was fishing right in front of the trailer with only 5 minutes left to go in the day and a crowd had gathered to watch all the kids finish out the day when Harnak and Christopolus set the hook and a brief battle yielded a fish of well over 3 pounds, enough to upgrade and cull a small 12 inch fish and give them the win as the gathered crowd applauded, cheered and actually watched them catch the winning fish! You could not have scripted it any better!

Congratulations to all the teams!