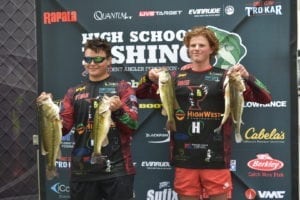 A strong field of 138 teams launched on Cross Lake this weekend for the Louisiana High School Fishing State Championship.  All teams were looking to be in the top ten percent of the field that would qualify to advance to the High School Fishing National Championship in June on Pickwick Lake.  When it was all said & done,  one team scored an 8.14 pound beauty, and it took double-digits to make the cut. 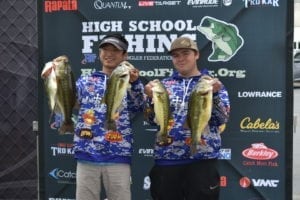 The South Bossier Panther team of Ethan Tasche and Hunter Cheney emerged as Champions with a limit of bass that topped the scales at 19.12 pounds.  The Loyola Flyer’s team of Blaise Chagnard and Christopher Giordano finished in the runner-up position with a nice sack weighing 17 pounds. 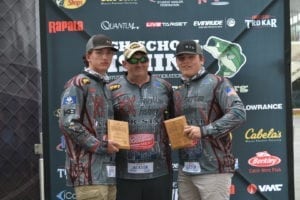 Several of the anglers were all smiles as they crossed the stage to weigh in the biggest bass of their careers.  In all, there were nine fish over 5 pounds.   The biggest one went to the team of James Rose and Gavin Roe with a giant 8.14 pounder.  The Haughton High School team locked in third place with 16.10 pounds.

Rounding out the top five teams were John Kyle Pearce and Jackson Gregory from Calvary Baptist Academy with 15.13 pounds and Landon Jinks and Noah Sistrunk from Sterling Community High School with 14.08 pounds.  It took just over ten pounds for the qualifying cut to advance to Pickwick.

Most of the anglers reported catching their fish fairly shallow mainly from 2-5 feet of water.  They were targeting standing timber, buck ball bushes and gross-lines using a variety of lures  like spinner-baits, swim-baits, senkos, flukes; mostly some type of plastic creature bait.

Next stop for the SAF High School State Championships is March 31 in Kansas and Kentucky.  Registration is open now for the 2018 High School Fishing World Finals.