Strong Start on Pickwick; Tilghman and Walker Lead it with a 10 pound 8 ounce Kicker 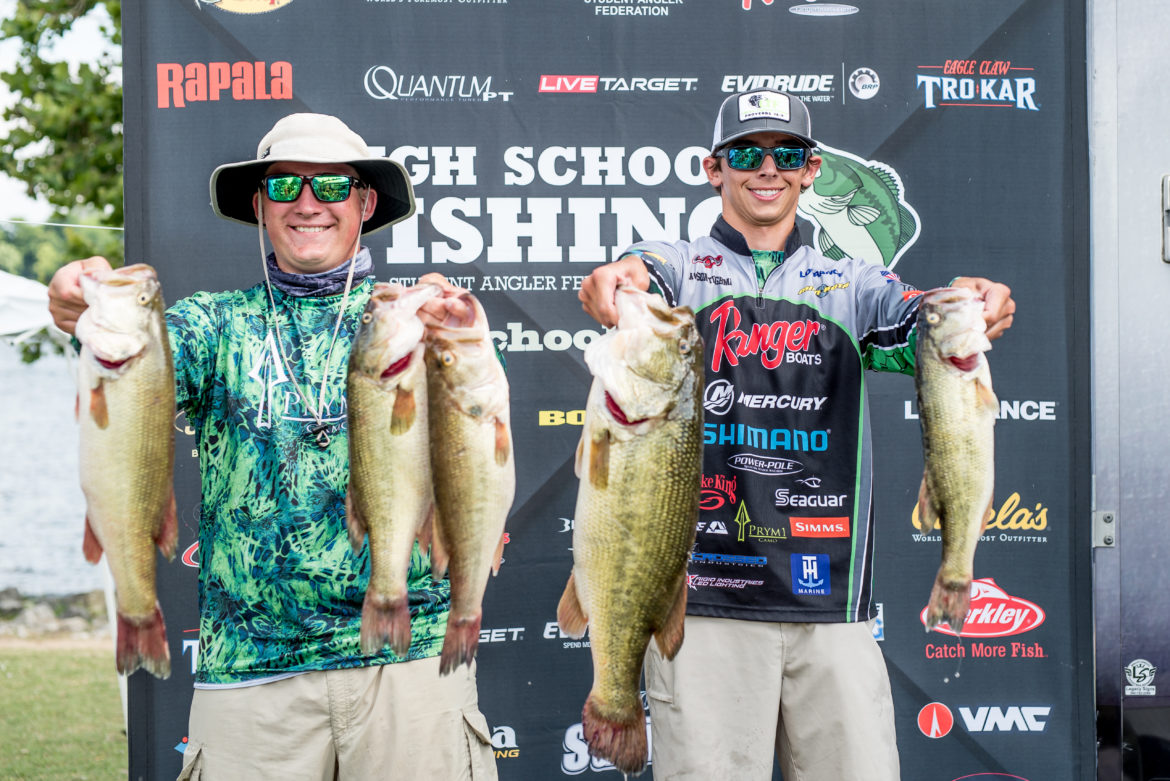 Day one of the 2018 High School Fishing World Finals and National Championship contests held their weight in notoriety.  These young champion anglers from across the nation proved they were here for one reason only – to seize the titles.
The top 10 overall anglers are separated by less than eight pounds.  The rest of the field is close behind and based on talk at the scales, most that aren’t are definitely figuring them out.  This event will see over $150,000 in scholarships and prizes awarded, plus more than double the scholarships, prizes, giveaways and incentives.  Not to mention, it will continue its fame as the most talked about high school event in the country.
Coming across the stage today were several teams inching towards the lead but in the end it was the Hardin County High School Tigers team of Lawson Tilghman and Cort Walker.  Tilghman and Walker sealed the deal with a 10 pound 8 ounce beauty that both silenced and then roared the crowd.  The Tennessee anglers have grown roots not only as family but also on this lake, which they believe is going to make it a tough act to follow.
“We are all pretty much family.  We are always out on this water,”  Tilghman said.  “We kinda grew up like that – like neighbors – we’ve got a lake house here and so anytime I’m not traveling to pre-fish the Costa I’m here fishing this lake.  This is our first year fishing the High School Fishing World Finals together but we’ve been planning on it; just waiting on it to line up right.”
The duo landed 25 pounds 1 ounce to take the lead going into day two but are confident there is more of that to come.  “ Seriously, if you can learn to fish this lake it really carries you over to a lot of lakes,” Tilghman continued.
“Sneaky spots is what we call them.  If it’s on the chart somebody has it marked so we always try to find stuff that is off the wall and hidden. Those fish are pressured.   They’ve seen everything.  They’ve done their homework.
We are moving around the whole day if we don’t have a bite just trying not to waste a lot of time.  You can’t just beat it up since it’s a three day tournament you need to rotate through them with chances of going back.  They have your number, and they know what you’re throwing.”
Close behind in second overall is the North Augusta Fishing Team of Kyler Mckie and Chad Champy with 23 pounds 9 ounces.  In third, is the NAT – Eagan Bass Fishing Club of Brian Linder and Nathan Thompson with 22 pounds 6 ounces.  Like Tilghman stated, it will be a three day grind to the final cut day and those spots are wide open.
Day two continues tomorrow at McFarland Park and Lake Pickwick in Florence, Ala.  Through the week, SAF sponsors have dedicated their time and their investments in the future of our sport.  Today, was MoveU, Eagle Claw Tro Kar and Quantum day resulting in free swag plus giveaways held all through the weigh-in.
Tomorrow, day two unfolds with take-off starting at 5:30am at McFarland Park and the weigh-in at 1:30pm CST.  Attendance is open to the public.  Both events are filmed for television on the Pursuit Channel and are streamed live on www.highschoolfishing.org.  Daily pictures and updates are also on the Student Angler Federation Facebook.
HSFWF Day 1 Results
HSFWF Day 1 Big Bass Report
HSFWF Day 1 Top State Leaders
National Championship Results
,