Colin Steck and Nate Lorenze landed the tournament big fish, a 5 pound 4 ounce beauty 10 minutes into Saturday morning’s Central Conference Regional on the Ohio River.  Catching that fish set the stage for what they both hoped could be a repeat win from last year’s championship at Lake Carlisle in Illinois.

“Catching that big fish right off the bat this morning on a crankbait was a huge lift for us,” Steck, who is a senior at Waunakee High School said.

“We knew we had to grind it out and get more fish to go with him to give us a chance,” Lorenze who is also a senior added.

Lorenze had an action packed weekend.  Friday night, he had a football game for Waunakee High where he had a 47 yard punt return for the winning touchdown.  Then, Lorenze traveled all night to arrive in time to join his partner in the boat this morning.

The pair was glad he did as they’d net three more fish for a total weight of 8 pounds 12 ounces to secure the repeat championship titles, as well as, their second trip to the High School National Championship. 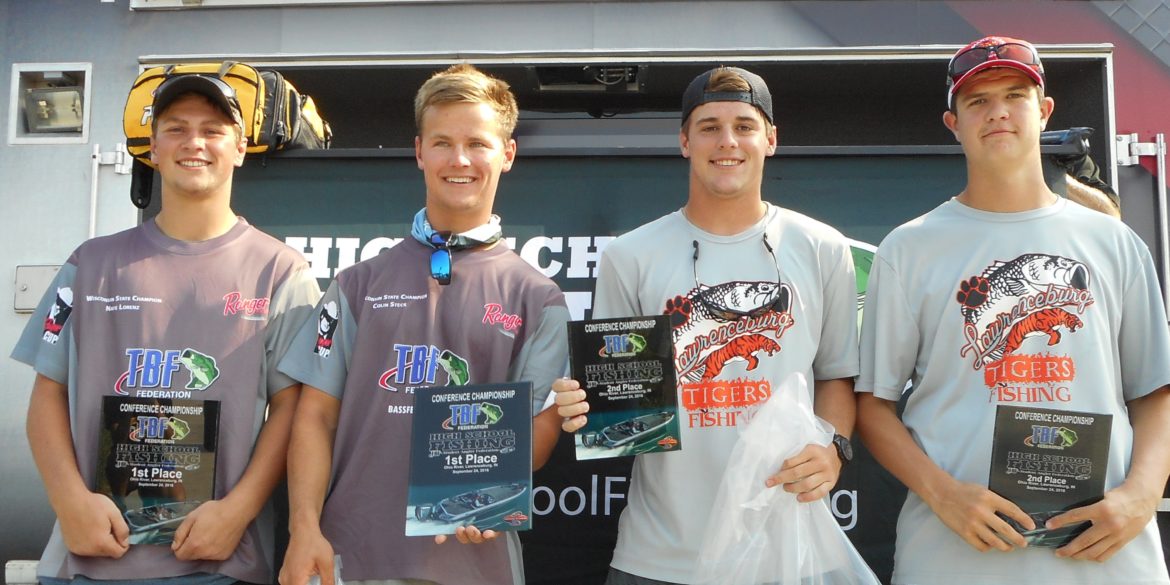 Coming in second and also advancing to the National Championship was the home town team of Hunter Schneider and William Halbig from Lawrenceburg High School in Indiana. They had a 5 pound 8 ounce bag and the only limit of the day, which was just enough to lock down the runner-up spot.

In third, was the Ohio team of Rocky and Tanner Jordan from St. Paris Graham High School who narrowly missed qualifying to advance with four fish that tipped in at 5 pounds 5 ounces.

The top 10% from each of the five Conference Regional events advance to the National Championship to be held in the Spring.

Special thanks go out to the Lawrenceburg Chamber of commerce and Ms. Connie Cleary who helped organize the event and the Lawrenceburg High School fishing team who volunteered to help and fed all of the anglers after the days weigh-in.