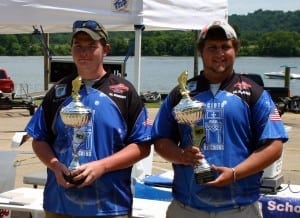 Logan Williams and Hunter Colwell had one fish in the boat at 11:30am but rallied to catch four more keepers in the last two hours to win the 2012 Ohio High School SAF State Bass Fishing Championship on the Ohio River in Gallipolis, Ohio.

“We were getting pretty nervous, but we had found these fish in the shade of the afternoon during pre-fishing a couple days before,” stated Williams. “When we got to that spot and started catching fish it wasn’t a surprise, but we were sure happy they were there again,” added the pair who represented the SS Minnows Bass Fishing Club. Anchoring their winning sack was the event’s largest fish a 3.30 lb largemouth that proved to be the difference maker for the pair.

Their 5 fish limit of 7.49 lbs was enough to top second place finishers Daryk Eckert and Haleigh Caldwell who represented Gallia Academy High School. They also had a 5 fish limit that weighed 6.55 pounds.

Finishing third was Jake and Clay Carter from Centerville High School. Their 5 fish limit scaled in at 5.12 lbs. to round out the top three teams in this year’s event.

The Gallia County Convention and Visitors Bureau sponsored the event for the second year on the picturesque shores of the Ohio River. 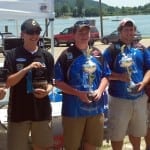 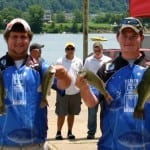 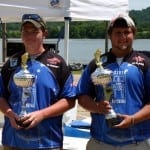