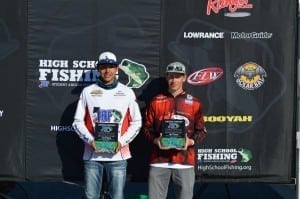 Trevor Yates and Jacob Keenum put together a nice five bass limit that weighed 12llbs even to win the TBF/FLW Southern Conference Regional Championship on the Red River in Shreveport over the weekend. The win propelled the Oklahoma duo to the TBF/FLW High School National Championship next spring at Grand Lake in their home state of Oklahoma.

Thirty Four teams representing 7 states qualified for the event which launched out of the beautiful facilities of Red River South Marina which has also hosted numerous other prestigious events like the Forrest Wood Cup in years past. Although the bite on the historic river was less than perfect, the young anglers from across the south central part of the country managed to catch fish when many adult events in the area were struggling to produce a single limit of fish. 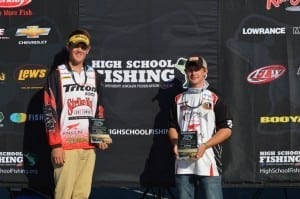 Finishing second and also advancing on to the National Championship was the team of Chase Meyers and Cole Swede from Arkansas who also caught a five fish limit that weighed 11lbs 13oz. They were able to outdistance Kansas angler Cameron Pappan who competed by himself to finish third with a limit of Red River bass that weighed 10lbs 10oz to grab the final qualifying spot. 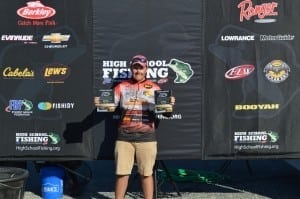 The top 10% of the field from five conference Regional events have now advanced on the High School National Championship at Oklahoma’s always productive Grand Lake. The event will be run in conjunction with the TBF Adult National Championship where the top weekend anglers in the country will be vying for a shot at the Forrest Wood Cup and the TBF “Living the Dream Package” which puts an amateur angler on the FLW Pro Tour for one year to test their skills against the best in the world in the sport of fishing.

Stay tuned to an upcoming article highlighting the ten teams who have qualified for the National Championship.