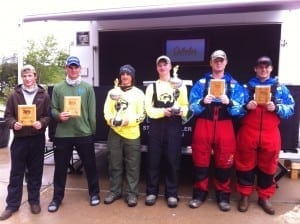 North Forsyth High School brought four teams to the 2013 Georgia High School State Championship and they took home the top two spots in the event with the duo of Branson Marks and Luke Slaton leading the way with an impressive five fish limit that weighed 18lbs 11oz.  Following close behind were their teammates Bo Kelentic and Cole Cloud who also brought an impressive limit of fish in that weighed 17lbs 1oz to claim the runner-up honors. Breaking up North Forsyth sweep was the team of Joshua Weaver and Regan Green from First Presbyterian Day who also had a five fish limit that tipped the scales at 16lbs even to claim the third spot.

Three days of solid rain brought the already massive Lake Lanier up over two feet in 48 hours as the 29 boat field of High School Anglers from across the state braved tough conditions all weekend long. As usual, youth did prevail, as 16 teams brought in the maximum five bass limit to the Laurel Park Amphitheatre where the Georgia Bass Federation staff greeted them for the weigh-in festivities.

“We used a Jerk bait and a Fluke almost exclusively today” stated Luke Slaton. “I threw the jerk bait and caught quite a few fish all day long while Branson threw a big Fluke trying to pick up that big bite we thought would put us over the top” added the smiling Junior. “We covered a lot of water today” added Marks, who is also a junior, “we started at the lower end of the lake and worked our way back to Laurel Park”.

When asked if there was one key item that triggered their success today the pair both answered that it was staying focused all day despite the tough conditions that triggered their win. Both Anglers were also quick to thank their boat captain and team coach for getting them into the high school program and creating the opportunity for their team to participate.

The SAF state championship series continues this coming weekend with the Arkansas State championship and their large contingent of High School teams looking to tame the waters of Bull Shoals Reservoir in Northern Arkansas. You can follow all the results at highschoolfishing.org.