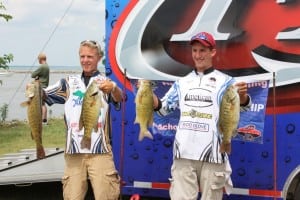 Lake St. Clair once again lived up to its reputation as a bass factory during Sunday’s 2012 Michigan High School Fishing State Championship. Two-person teams from high schools across the state gave everything they had for a chance to advance to the central division regional tournament and Lake St. Clair did not disappoint – surrendering limit catches of big bass to every team.

But simply weighing in big bass is rarely good enough on Lake St. Clair where winning weights frequently average more than four pounds per fish. Such was the case Sunday when the Lake Orion High School team of Nick Marsh and Kyle Boe needed a five fish limit of 21 pounds 11 ounces to claim first place. Anchoring their winning catch was a five pound 12 ounce bruiser which also won the big fish award for the tournament. And as it turned out, Marsh and Boe needed that big fish to separate them from second place finishers Jeff Cahn and Colton Throop from Clarkston and Pinckney high schools, whose five fish limit weighed 19 pounds 10 ounces. Fishing in their first-ever tournament, the Cardinal Mooney Catholic High School team of Parker Fox and Patrick Doetsch finished in third place with a very respectable 18 pounds 7 ounces.

The Student Angler Federation (SAF), a federation operating under the direction and guidance of the 25,000 member The Bass Federation (TBF), coordinated the tournament. Although only in its second year, tournament organizer and TBF Vice President Jeff Cox was pleased with the turnout. “Competitive bass fishing clubs are difficult to organize in Michigan because there’s very little time between the opener of the bass fishing season (the last Saturday in May) and the end of school for the summer” said Cox. “We doubled our participation from last year’s inaugural event and look forward to continued growth next year”.

While school may be out for the summer, the learning continues for high school anglers who are part of the SAF. The SAF is committed to furthering the education of young anglers by providing them with educational materials covering conservation, math, government and science curriculum. The SAF also provides on-line tests for the student – anglers and rewards those with the highest scoring test results.

In addition to tournaments and enhanced education opportunities, participation in the SAF also provides important benefits to the high schools, including insurance coverage and unique fundraising programs. “We have a really nice fundraising program where our anglers sell Solar Batsunglasses instead of popcorn or candy bars” says Mark Gintert, National Youth Director for TBF. “We offer a complete turnkey solution to schools, making it easy for them to start their own bass fishing clubs”.

Nick Marsh, half of Sunday’s winning team, is no stranger to the winner’s circle having twice won Michigan’s Junior State Championship. About to begin his senior year at Lake Orion HS, Nick is already thinking about a possible career as a professional bass angler. But even at his young age, he understands the importance of an education and plans to pursue a business degree when he finishes high school.

Based on Marsh’s savvy career planning, there’s ample evidence that the teachings of the Student Angler Federation are already paying dividends.