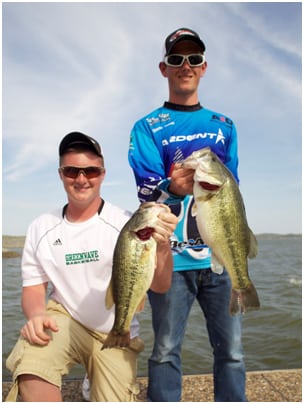 April 9, 2011 (Kentucky Lake, KY) – Now the high school fishing world knows that the Meade County High School SAF Fishing Club is in it to win it! Not only does the school proudly have the first ever High School Fishing World Finals Champions, Ethan Snyder and Jared Raymer, they now are home to the first ever SAF Kentucky High School Fishing State Champions. Club mentors and advisors, Frank Raymer and Travis Stull’s hard work and persistence seems to be paying off for the club, and their students are especially grateful for it.

State Champions, Donovan Jones and Stephen Compton, beat out their fellow club members and reigning HSFWF champs by 2 lbs 11 oz, winning themselves the opportunity to advance to the regional tournament to be held this fall. “It is a great accomplishment for both of us since we have been fishing so long. It feels great to be the first high school state champions because of all the hard work we have each put into becoming better fisherman.” Jones and Compton brought in a 5-fish limit weighing 12-13. Meade County brought 4 teams, and 3 of them placed in the top 5. Now that’s impressive.

A total of 46 teams from Kentucky competed for the first ever 2011 Kentucky State Championship.