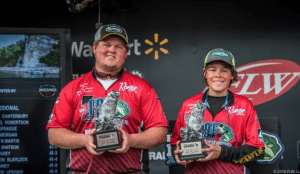 Held April 16-17 on Missouri’s Table Rock Lake, the prestigious, team-format event pitted the nation’s top prep anglers against one another for a shot at $10,000 in college scholarships and other great prizes.

Teams qualified for the tournament by winning their home state’s championship and competing in one of five regional conference championships.

Representing the Evans High School Knights, Matthews and Stephenson began their journey to Table Rock in March of 2015, when they won the 2015 Georgia High School Championship against 67 other teams on Clarks Hill Lake with an impressive 17-pound, 5-ounce basket.

Stephenson was in middle school at the time, and was able to pair up with then-senior Matthews thanks to expanded SAF rules that allowed 7th and 8th graders to participate with a high school-aged partner. Undaunted at the prospect of fishing against older anglers from across the Peach State, he boated a broad-shouldered, 6-pound, 2-ounce kicker that anchored their basket.

The win propelled them to the Southeastern Conference finals on Georgia’s Lake Lanier in September of 2015, where they squared off against 44 other teams from eight states for a chance to move on to the national finals.

Matthews and Stephenson again rose to the challenge, finishing third with 11 pounds, 15 ounces, earning one of the conference’s four coveted tickets to the grand finale at Table Rock.

At the national championship, the entire 12-boat field battled on day one, after which the field was pared to five for Sunday’s final round, with finalists being presented onstage at the FLW Tour event at WalMart No. 1 in Rogers, Ark.

On day one of the national championship, competitors faced challenging conditions. Water temperatures holding in the high 50s for several weeks had many bass stuck in a pre-spawn funk, with relatively few of the reservoir’s fish committing to shoreline spawning beds.

Despite a weather forecast calling for sunny skies, a light breeze and high near 70, the teams actually saw highs in the 50s, clouds and a southwest wind gusting at 15 mph.

Matthews and Stephenson landed in third place with four bass for 11-11. The pair keyed on fish moving toward the shoreline in preparation for the spawn, prompted by warmer water. “We found water up to 64 degrees today,” Matthews told the weigh-in crowd.

Arkansas seniors Chase Myers and Cole Swede of Anvil Jaw Bass Club in Little Rock paced the field with a 15-5 limit. They made a long run up the James River and were optimistic about their odds of holding onto the lead on day two.

“We still have a lot of spots we found in practice we didn’t even hit today,” Myers told the crowd. “I hope the weatherman is wrong again tomorrow because the wind is helping us out.”

The Arkansas team was more than a little intimidating, having finished a solid fifth in last year’s high school championship on Oklahoma’s Grand Lake.

To claim the high school crown, Matthews and Stephenson would also have to hold off anyone behind them while slipping past Ohio’s Daniel Hechler and Cole Wessner, who were entrenched in second with 13-00.

As the five teams idled out of the Port of Kimberling on day two, thick clouds blocked the rising sun, the wind was from the south at 5 to 10 mph and the air temperature hovered around 61 degrees. Conditions changed as the day wore on, however, and the finalists quickly faced a strong south wind gusting to 20 mph and a high of 72 degrees.

As they had on day one, Matthews and Stephenson relied on shaky-head jigs rigged with green pumpkin craw imitators. The strategy boosted their two-day total to a hefty 27 pounds, 1 ounce, giving them hope the crown was in sight.

To the cheers of the FLW Tour crowd, the Georgians indeed rose to the top of the leaderboard as Myers and Swede dropped to second with 25-06 while Hechler and Wessner landed in fourth with 19-07.

It was a particularly emotional victory for Matthews, as it marked the end of his High School Fishing career. He plans to attend college in the fall of 2016 but has yet to decide on a school. When not working, he spends his free time pursuing his passion for fishing.

Stephenson is currently in eighth grade, and reports that when he finds free time from his studies, he enjoys being outdoors and fishing.