The event was sponsored in part by local Ranger boat dealer, Austin Boats and Motors. The team fishing format placed two anglers in a boat keeping and weighing in their largest five bass exceeding 14 inches. At 6:30 a.m., the conditions on Lake Travis were misty, cold, cloudy and windy, but that did not deter 51 eager high school anglers from giving it their best shot on the frothy, windswept lake. Fishing was reportedly difficult in those conditions, and it was as difficult to catch fish as it was to find a relatively calm cove.

Big winners for Lake Travis were Tyler Anderson and Watt Sones, claiming first place overall with three fish totaling 5 pounds, 6 ounces. They were each rewarded with an Abu Garcia Bait casting rod. When asked about the inhospitable fishing conditions 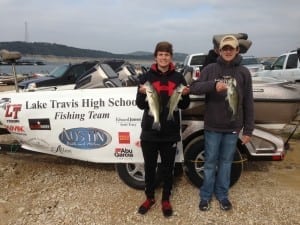 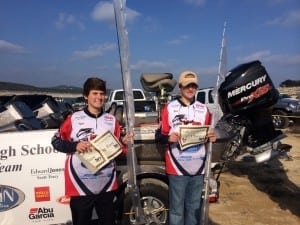 “Everyone had to fish in the same conditions, so we knew if we fished hard and never quit we would have a chance,” Sones said. “Our efforts paid off when we caught our biggest fish right near the end of the tournament.” 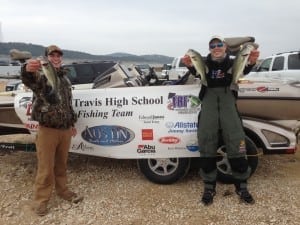 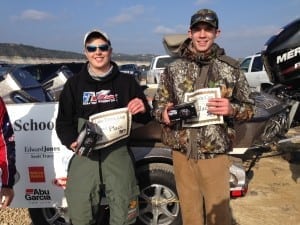 Tyler Anderson of Lake Travis won the Big Bass award with a bass weighing in at 2 pounds, 14 ounces. The prize he was awarded was an Abu Garcia bait casting rod 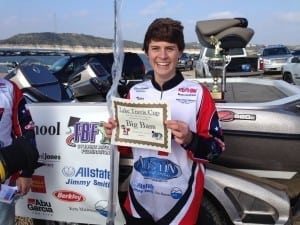 The final victory that belonged to the Lake Travis team was that of the “LT Cup” trophy. This trophy was awarded to the team that had the highest average fish weight per team of all the teams participating from their school. Lake Travis claimed the trophy with an average weight of 27.25 ounces per team. Second went to FAN High School team with an average 11.5 ounces per team and Marble Falls was third with 8.5 ounces. 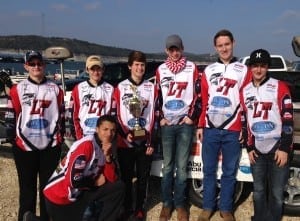 Adding to the tournament excitement, television producer Brian Sobie of the World Fishing Network was in attendance producing a story on the growth of high school fishing. Sobie and his camera man filmed the entire day, including on the water fishing footage, the weigh-in, the award ceremony and several other interviews with anglers and team leaders. The show will air in January or February on the World Fishing Network.

For additional information or to keep up with the Lake Travis high school fishing team, visit facebook.com/LakeTravisHighSchoolFishingTeam.

Here is a link to the story in our local paper.