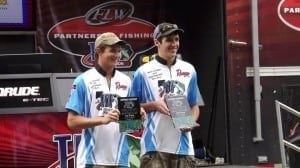 KJ Queen and his partner Tyler Black put on an impressive display of fishing as they conquered a very tough 41 boat field as well as a very stingy Lake Nickajack with a 5 bass limit that weighed 17lb 8oz to win the SE Conference Regional Championship and a qualifying berth in the 2015 High School National Championship. Fishing directly after the Tennessee TBF Adult Eastern State Championship which saw well over 130 of the top adults in the state struggle for two days, Queen and Black put together a winning strategy that found them throwing a lightly weighted brown worm and fishing it slow to medium speed through the grass to catch their impressive sack. “It was just a grind all day” stated Queen who is in his freshman year at Bethel University. “We probably caught 25 fish today and we caught them all day long. We just had to weed through the small ones and find the right size” added the smiling angler who is no stranger to winning regional championships having won two years ago with his sister Chelsea who is also on the fishing team at Bethel University. “We caught our last fish across the bay from the check-in point with about 30 minutes to go and we are really excited to be advancing on” cited Black who is a junior at Bandys High School in North Carolina. “When this is over I have to go back to school and find a new partner and it’s certainly not going to be easy to find one to replace KJ”. 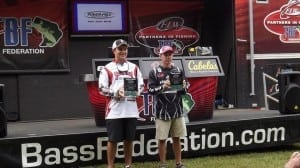 Finishing second with a very respectable 5 fish sack that weighed 15lb 3oz was the talented due of Ryan Shields and Zeke Gossett from Alabama. These two veteran anglers who have fished about every possible circuit a pair of young anglers could fish this year also brought in a limit that would have also toppled the adult field of the previous two days. “We fished hard all day stated Shields and we are really happy to be advancing on”.

The top 10% from each of five regional championships advance on to the TBF/FLW High School National Championship April 25th and 26th at Grand Lake Oklahoma. 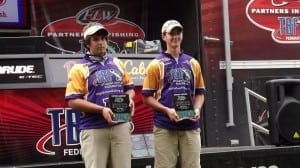 Finishing third and advancing on to the Oklahoma Championship from the home State of Tennessee was Triston Crowder and Saxton Long who also had five nice Nickajack bass that weighed 12lb 6oz. “It was tough” stated the smiling pair! “We were just happy to get the bites we got today and get the chance to advance” added the duo.

The battle for the fourth qualifying spot was about as close as it could get as Jake Lee and Corey Brooks from the Karns Fishing Team edged out Luke Slayton and Branson Marks of Georgia by one ounce to finish fourth. The pair also had a 5 fish limit that weighed 11lb 11oz to claim the final spot. 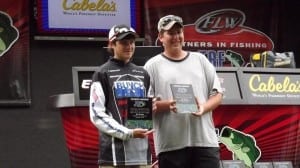 “This was just an incredible field of young anglers” stated TBF Youth Director Mark Gintert.  Each of these 41 teams were excellent anglers and I felt that with the right decisions and a little luck any of the teams here could have taken the crown” added GIntert. High School Fishing has come a long way in the last 4 years and these anglers represented themselves and their schools very well”.