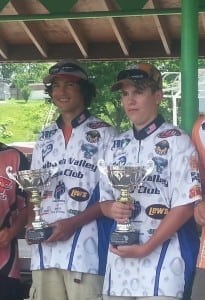 Elijah Hamrick and Griffin Fernandes from the Wabash Valley Bass Club brought a nice 5 bass limit that weighed 10.31 lbs. to the Indiana Beach Resort scales on Saturday to win the SAF Indiana High School State Championship on Lake Shafer. Coming in second was the team of Chase Banister, John Weddle from Columbus East High School who also had a limit of fish that weighed 8.94 lbs and that was enough to outdistance Shawn Zellers and Beau Ashcraft also from the Wabash Valley Bass Club who finished third with 8.33lbs.

Hamrick and Ferandes will advance on to the Central Conference Regional Championship in Huron Ohio Later this fall.

A special thanks goes out to the Indiana TBF for organizing and running the event along with the City of Monticello Indiana who served as host for the annual event.