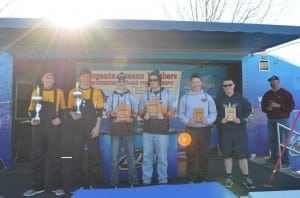 The two anglers brought in 4 fish that weighed 9lbs 4oz to claim the title and advance on to the Central Conference Regional event next fall.

Joining the pair will be Anthony Fazio and Daniel Degraaf from Minooka Community School who brought in 6 bass that weighed in at 9lbs even.

The 2014 SAF event was run in conjunction with the Argenta/ Oriena Open event. We would like to offer a special thanks to Jason Parsons and his team anglers for hosting the event.