Winning an event like the Bobby Lane Cup once is hard enough but to repeat the feat in back to back years is even tougher!  But that is exactly what Hunter Gadd and his partner Jackson Williams did as they brought a 6 fish limit of 19lbs 1oz to the Camp Mack scales to win the 4th annual Bobby Lane Cup on Kissimmee Lake in central Florida. Last year Gadd teamed with Ryan Thomas to win the event. This year Williams joined him in the boat but the result was the same for Gadd, another victory to add to his impressive resume’. 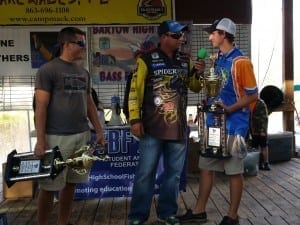 Just 5 ounces behind them with 18lbs 12oz the team of Harry Linsinbigler & Jason Wladyka from Strawberry Crest High School secured the runner-up spot in the event that drew anglers from across the state of Florida and a strong contingent from Central Kentucky who escaped the cold for a few days to enjoy the terrific fishing in the Kissimmee chain of lakes.

This event features the great combination of the Lane family and a host of volunteers as well as the team from Bartow High School who have worked diligently to build High School Fishing in the state of Florida. It also serves as a great warm up for the upcoming Florida SAF High School State Championship coming up on February 28th at Big Toho marina which is also on the same Kissimmee chain of lakes.