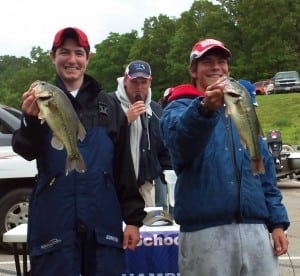 5/14/11, Lake of the Ozarks – The Missouri High School State Bass Fishing Championship started the day with teams from across the state welcoming in a cold front that brought plenty of wind and a little rain to the Lake of the Ozarks State Park in Osage Beach, Missouri.

Teams had to battle less-than-favorable conditions for most of the day, but as always youth did prevail and all of the participating teams battled the Wiley bass of this massive impoundment. When the wind and rain had all cleared, the team of Brian Pahl from Eureka High School and his partner Andrew Guilliams of Glendale High School teamed up to win the inaugural Missouri High School Fishing State Championship with a 5 bass limit that tipped the scales at 11.03 pounds.

Guilliams and Pahl usually compete against each other in various fishing events around the state but this time they teamed up to win the crown throwing a variety of spinner baits along the gravel banks primarily contentrating on those areas where baseball size rocks that were mixed with pea gravel.

Following them in second place was the Eversmeyer brothers, Jon and Joel, of Warrenton High School who were just about half a pound behind the champs at 10.56 lbs. Rounding out our place winners were Seth Carleton and Dylan Sousley from Team Concepts, near Kansas City and Trimble.

Each team that competed is now qualified to enter the 2011 High School Fishing World Finals held in July in Russellville, Ark., with no entry fees.

TBF and SAF would like to thank the Missouri Bass Federation, and President  Dave Lindner, his wife Carol, Lake of the Ozarks Tri-County Lodging Association Board of Directors and the entire tourism family at the Lake of the Ozarks  and all the volunteers who helped make this event happen. And a huge thank you to all the parents, mentors, teachers, coaches and boat captains for getting your students involved with high school fishing! Thank you all! We couldn’t do this without you.