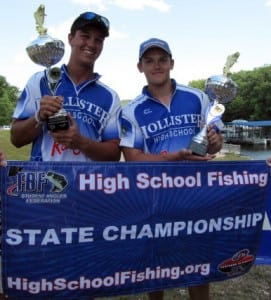 Saturday June 2nd, 2012 started like any other bass tournament day at Public Beach #2
on Lake of the Ozarks, it was a great day for a Championship.

Layne Woods and Jessie Fisher of the Hollister High School Tigers bested Saturday’s field
by fishing main lake points with a two punch pattern bringing in 14.75 pounds to the
scales for their win!

The winning Hollister duo traveled up-lake near ‘Turkey Bend’. Layne stated “We started
on a point and we used jigs the majority of the day”. Jessie was quick to add “and 10 inch
worms”! They had their five fish limit early in the day and “towards the end with about 10
minutes left we caught two nice keepers” said Jessie. “These culled our smaller fish”
added Layne, whose 4.63lb anchor proved to be the days big bass. Woods and Fisher now
advance to the FLW Outdoors/TBF Conference Championship. 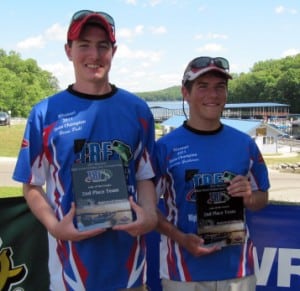 A close second was claimed by Andrew Guillams and Brian Pahl of the Eureka Wildcats who were our reigning 2011 State Champions. These two held on for a 20 plus mile ride
from the launch to the dam and used 10″ worms and jigs for a total of 12.81 pounds with
their 5 bass limit. Andrew would like to thank his sponsor “Son Ray’s Automotive,
Springfield, Mo.”. He has come up the ranks in the MO TBF Youth program and will be
representing MO at the National Guard Junior World Championship (NGJWC) in the 15-18
age group in August.

The team of Jacob Harris and Daniel Walker from North County claimed third place in
their first tournament with five bass weighing in at 9.89 pounds. An early buzz bait bite
netted them 5 bass weighing 9.89 lbs.

The Missouri TBF would also like to thank the Inn at Grand Glaize for their hospitality
during registration for our mandatory pre-tournament meeting and accommodations on June 1st. Missouri TBF Youth Director Carol Lindner reviewed tournament rules and the role of “coaches”, to have a fun day with emphasis on sportsmanship and safety.

Our anglers were then treated by special guest speaker Brian Maloney. 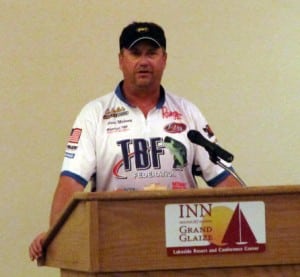 Brian is the 2012 BFL All American Champion. He qualified to fish the event by advancing from the Missouri TBF State team, through a Division Championship and finishing in the top 8 at the 2012 TBF Nationals. Brian gave a bit of fun insight to the crowd, ‘Fish your strengths’ and ‘your main competition out there is green, with a brain the size of a pea’. Many ‘thanks’ to you Mr. Maloney!

registration was likely not as exciting as the day to come. Mr. Spradley and Ms. Alaimo were treated photo opportunities during the Championship day by Missouri President Dave Lindner aboard his Ranger bass boat. A second camera boat for the event was captained by the MO.TBF webmaster. He caught
up with a few teams for snapshots and even managed to capture a few (very) short videos for the Missouri TBF Facebook page  http://www.facebook.com/MO.TBF).

This was the second annual Missouri High School State Championship bass tournament and we will host another event again next year. The Bass Federation (TBF) in partners with FLW Outdoors sponsors this event in many states across the country. Trophies and plaques were supplied by The Bass Federation. Local sponsors are the Missouri TBF and the Lake of the Ozarks Tri-County Lodging Association.

TBF would like to thank the Missouri Bass Federation, Dave & Carol Lindler, Brian Maloney and all the volunteers who helped make this event happen. 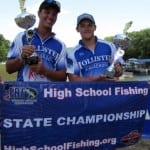 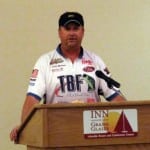 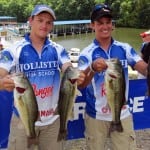 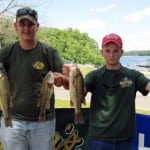 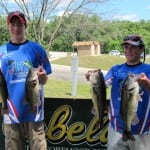 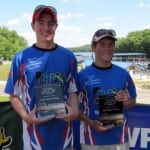 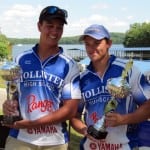