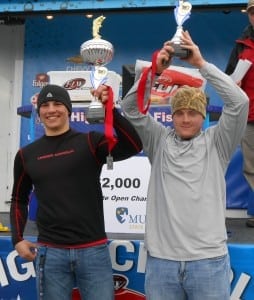 The Student Angler Federation, SAF kicked off the first high school event of the season Sunday afternoon at the Murray State Open.  The event was held on Kentucky Reservoir in Benton, Ky.  In total, 57 teams from five different states competed on the legendary waterway, battling not only the fish but also the bitter cold with temperatures in the twenties.

A week before the MSU event, which also served as the Kentucky SAF State Championship, Reid Finley from the Calloway County Bass Fishing Team was still looking for a partner.  Nearly 640 miles away, Brandon Oswald, was looking for a place to fish.  Oswald stumbled on to highschoolfishing.org, and through the efforts of TBF and FLW the unusual teammates were paired.  The rest is history as the two totaled 25lbs 3ounces to win the Murray State Open and $2,000 scholarships to Murray State.

The famous Alabama Rig proved its weight in gold for the pair as they threw the multi-bait rig to win the first state championship of the SAF season.

“We moved around a few times and we would find a few fish in each spot,” Finley said.  “It was just a terrific day of fishing; I can hardly stop shaking!” It was questioned whether or not he was shaking from the excitement or the weather, laughing, Finley said it was a little of both.

“We don’t have bodies of water like this in Wisconsin,” Oswald stated.  “I usually fish rivers, so this was a great experience.”  Oswald’s family traveled 10 hours for a chance to fish the open.  “My arm is going to be sore tomorrow; we threw the rig all day long.” 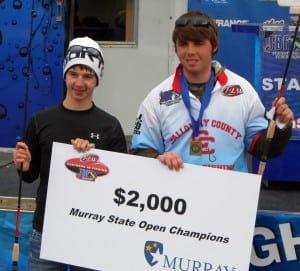 The highest finishing team from Kentucky, Austin Mourad and Micah Chessor, caught a limit of bass tipping the scales at 21 lbs 4 ounces to edge out Bracken Robertson and Dillon Starks of Calloway High School for Kentucky state bragging rights.

The battle for third for the Kentucky SAF Championship was settled by a tie-breaker.  Tyler Schanbacher and Jesse Vaught from Calloway High School, and Colton Smith and Brenton Clemons of Southwestern High School, both had a 20lb 1ounce sack.

The teams tied for third through the initial weight and the next two tie breakers. Finally, the tie was broken by the team who registration for first, which was the Schanbacher /Vaught team.

The SAF State Championship series continues its nationwide trek with events scheduled this coming weekend in Florida and Louisiana.