Cousins, Rocky and Tanner Jordan, started their fishing careers with each other at family outings and get-togethers. 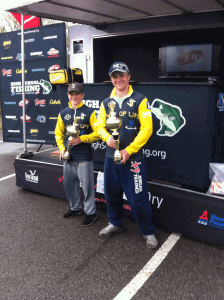 Saturday at Alum Creek Reservoir in Columbus Ohio they took their partnership to the next level by teaming up to win the Ohio State Championship with a 5 bass limit that weighed 11lb 13oz.

“We used black and blue jigs most of the day concentrating on timber in the back of creeks and bays” stated Rocky a sophomore at Graham High School. “It was a slow grind and caught just about one fish every hour which enabled us to cull a few times added the Tanner who is a freshman at Graham this year as well. When asked what was the key to their success they both credited the boat captain with keeping them on point and fishing hard all day. They both were also very quick to give Mother Day shout-outs to their respective moms.

The two smiling anglers will lead a five team contingent on to the Central Conference Regional Championship in September at Tanners Creek landing in Lawrenceburg Indiana. 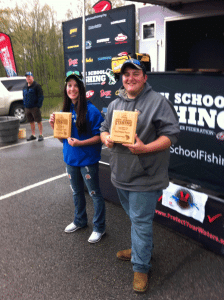 from Field and Carlisle High Schools who had four Alum Creek beauties that tipped in at 8lb 14 oz to claim the runner-up spot and also advance to the fall regional which will give anglers a shot at advancing to the High School National Championship.

Colten Didion and John Hutson from the Hartley Bass team also had four fish that weighed 8lb 12oz to claim the third position and just ahead of Tanner Ward and Ethan Woodie who had four that tipped in at 8lb 5oz to finish fourth.

Rounding out the Top five was the duo of Zach Rand and Austin Hall from Fayette County High School who only had three fish but one of them was a 4lb 3oz beauty that claimed the Big Bass award for the day as well as sneaking them into the final qualifying spot with a 7lb 7oz sack.

Special thanks goes out to Cabela’s who hosted the Registration meeting on Friday night that provided all of the anglers and their boat captains with pizza and discount coupons. The Shimmano Experience team also had a great display at both the registration and the weigh-in which all the anglers enjoyed. 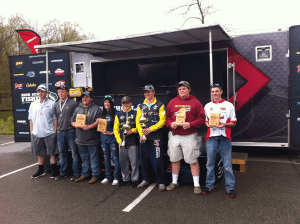 The TBF/FLW High School Championship series continues this week with the re-scheduled Grand Lake Open as well as the Alabama State Championship and open on Wheeler Reservoir in Florence Alabama.