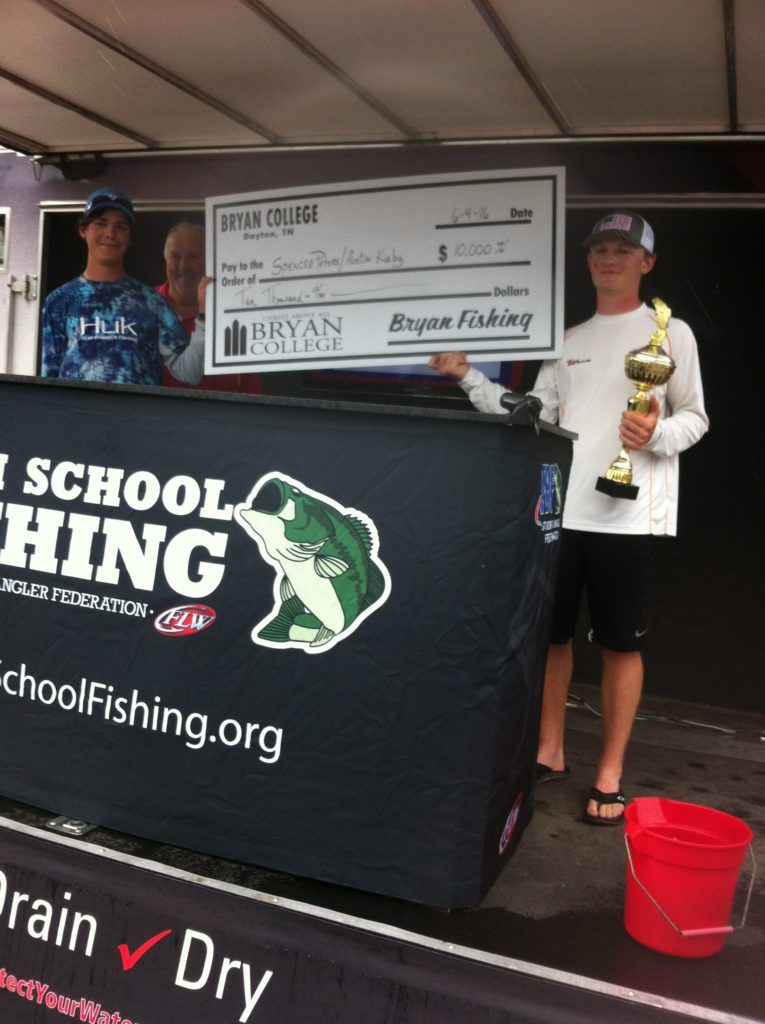 Campbell County and Norris Lake proved to be a terrific host for the 2016 Tennessee High School Fishing State Championship on Saturday.  Spencer Peters and Austin Kirby put together an impressive five bass limit that weighed 13lbs 2oz to claim the championship titles on the scenic lake.

The pair stumbled into their fish first thing Saturday morning but capitalized on the finding to put a limit of fish in the boat quickly and then cull their way to the weigh-in. “I got hung up next to the shore at our very first stop this morning,” Spencer, who will be a senior this year at GCA said. “When I spun the boat around to go get it out Austin flipped out into the deeper water off shore and immediately caught a fish.

We then decided to back off the shore line a little and target an area that was 10-15’ deep and that is where we found most of our fish,” Peters continued.  “Had we not got hung up we may have passed over the entire spot.” 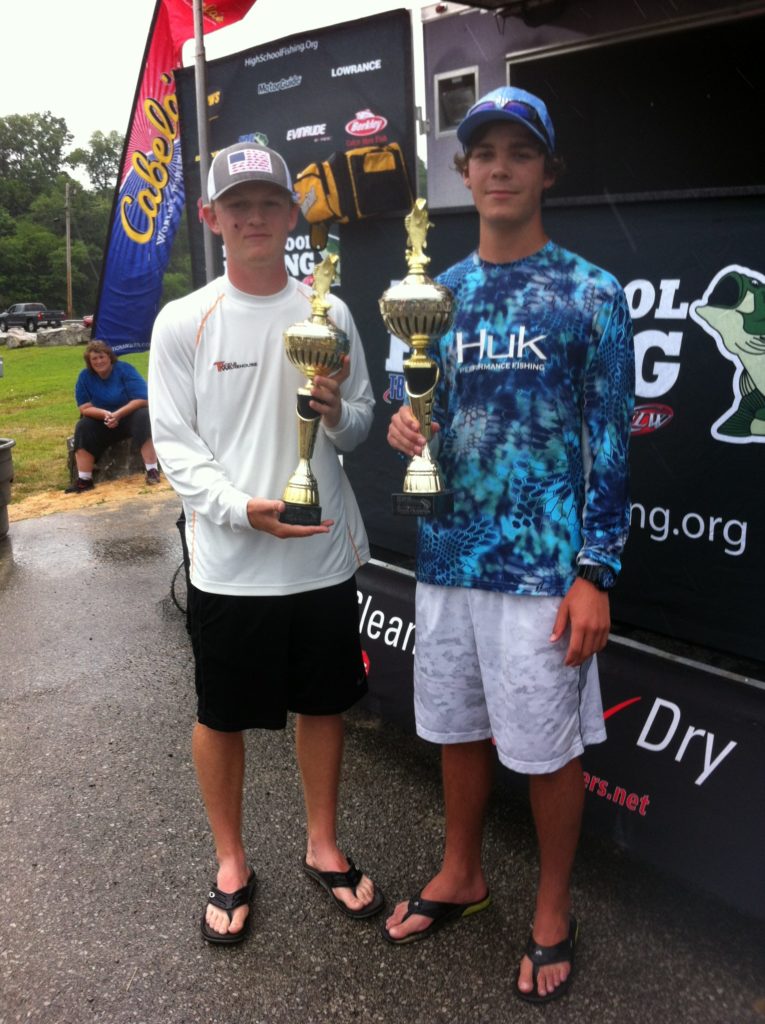 “Once we found the location we primarily used a green pumpkin colored Carolina rig to catch all of our fish,” added Kirby who recently graduated and will attend Carson Newman College next fall. “Every fish we caught was a keeper and we probably culled 7 or 8 times today. When Spencer caught a big kicker smallmouth toward the end of the day we felt we had a pretty good chance to win.”

The pair will lead a six team contingent of anglers on to the Southeast Conference Regional Championship on Lake Cumberland in September.

Coming in second, was the team of Alex Gault and Hunter Thrasher from Lincoln County High School who had a five fish limit weighing 10lbs 10oz to claim the runner-up spot and also advance to the fall regional.

Claiming the third position was the team of Dillan and Jonathan Carroll from the host school Campbell County High School.  They had a limit that weighed in at 9lbs 15oz to finish just ahead of Ryan Winchester and Jake Lee from Clinton High School with a limit weighing 9lbs 4oz.

Coming in fifth was the duo of Charles Woody and Tristen Lowe from Polk County whose limit of Norris Lake bass weighed 8lbs 8oz.  Rounding out the six regional qualifiers was the team of Daniel Cheshire and Steven Mills from Creek Wood High School who only had four fish but still managed to bring in 8lbs 5oz.

The Lew’s Big Bass Winner for the event went to the team of Caleb Dryer and Logan Wollard with a solid 5lb beauty to claim the Lew’s Big Bass Award and a pair of nice reels for their efforts.

Special thanks go out to Ms. Cindi Reynolds, Mayor Morton and the entire staff at Campbell County who put on a terrific event for all the teams traveling to the picturesque Norris Lake for the event. 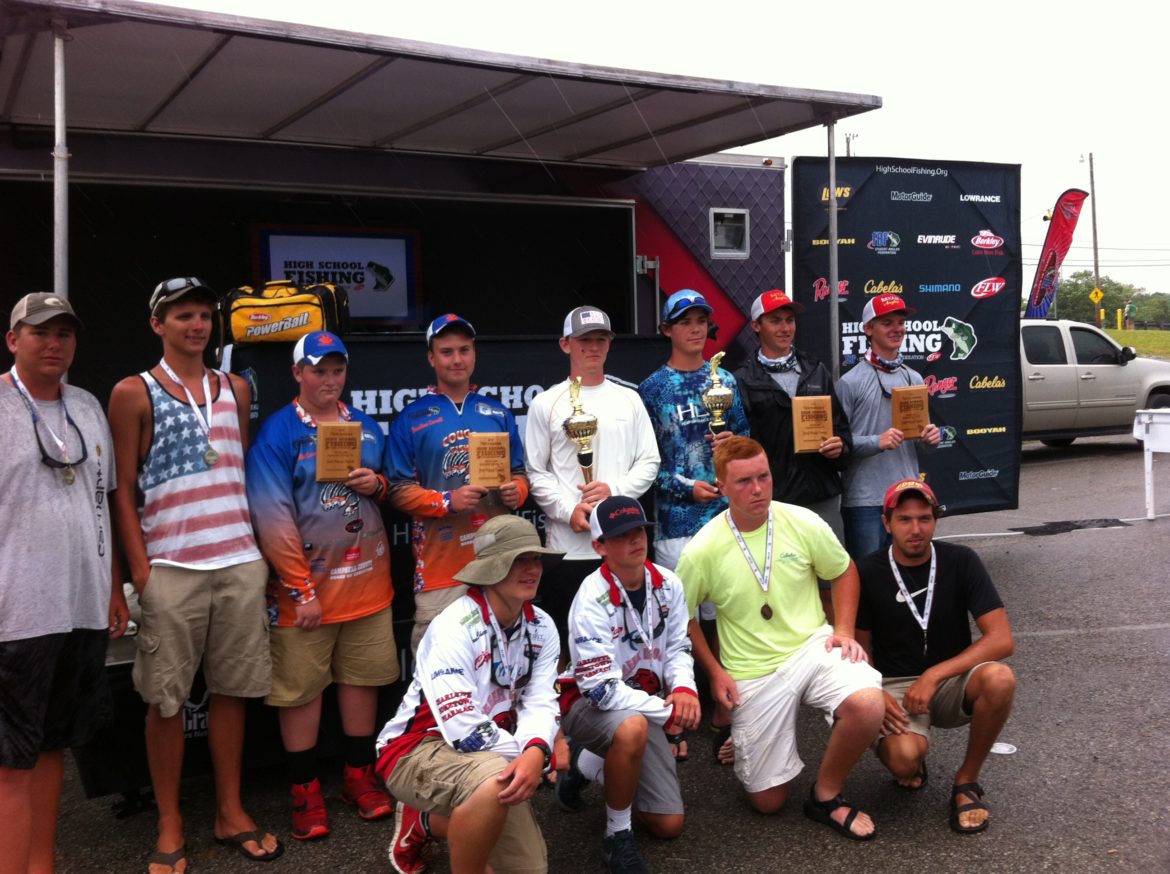