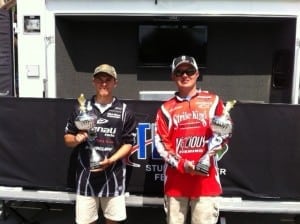 Ryan Shields and Zeke Gossett used a solid pattern of flipping frogs and jigs in shallow water to win the 2013 Alabama SAF State Championship with an impressive 5 fish limit that weighed 16 bs 3 oz.

The scenic setting of Coosa Landing in Gadsden, Alabama and Lake Neely Henry set the stage for a beautiful day where the teams battled the Holiday crowds and a couple of local tournaments while fighting for the regional qualifying spot at the TBF/FLW Southeast Conference Regional event help in October at Lake Lanier, Georgia.

“We caught most of our fish in either 10 inches of water or three feet of water,” stated Ryan Shields a junior at Pell City High School. “We caught 17 to 18 fish today using that same technique,” added Gossett. “We were able to cull up a couple of our fish throughout the day and we felt pretty confident heading to the scales,” added Gossett who is also going to be a junior this year at Pell City. 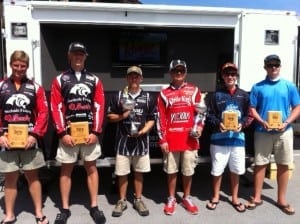 The pair also credits their win to their tough fishing schedule that has seen them fishing High School tournaments all spring throughout the state of Alabama. “We have been on the water since the first of February and it feels good to get a win at this event,” added the pair.  “We have a several great sponsors like Strike King Lures, Moment Sportswear, Elite Tungsten, Vicious Fishing and Power Pole that make fishing this kind of schedule possible for us to compete in.”

Finishing second was Madison Hays and Cole Mayo of Southside High School who also had an impressive limit that weighed in at 12lbs 4oz to outdistance third place finishers Houston Calvert and Christopher Kanute of Hayden High and the Alabama Jr. Generation Angler club who brought a 5 fish limit of 11 lbs 7 oz. to the scales.

The SAF State Bass Fishing Championship series continues this week with events in both Tennessee and Minnesota on the busy high school tournament schedule.