In one of the most exciting finishes in High School Fishing World Finals history, Peyton Porter and Coleton Jennings representing Calloway and Marshal County High Schools in Western Kentucky came from behind to win the most coveted crown in all of High School Fishing. The pair dedicated winning their world Champions titles to a former teammate Dalton Cooksey, who now fishes the FLW Tour and who was injured in a car accident just one week ago. “We made it our goal to try and go out and win this for Dalton” stated Jennings. He is one of my best friends and we are just thrilled we were able to get it done! 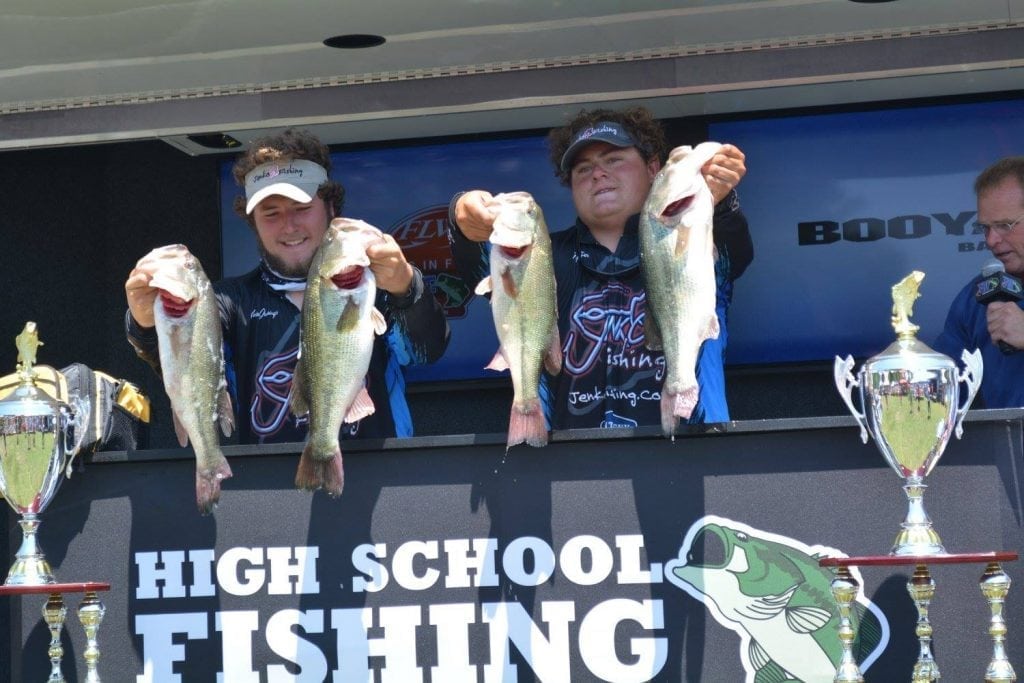 Qualifying for the final day by finishing second in the consolation round the team went out as  boat #12 and the Kentucky pair made a long run to the far end of Pickwick Lake. Once at their spot they threw a variety of baits to catch an impressive 26lb 3oz limit of bass. That put them squarely in the McFarland Park Stage “Hot Seat” where they had to watch the remainder of the contestant weigh-in one by one to see if they could hold onto the top spot.

Then it came down to the last team of the event to weigh in, it was their biggest obstacle of the entire event in the form of the Walker Brothers from Hardin County High School who had been on fire all week. Cole and Cort had led each of the first three days with impressive sacks of fish and they would not disappoint the crowd on this day either.

The overflow crowd grew silent as the Walker brothers weight of 23lb 6oz locked in on the scales and was officially called. That weigh took less than a second to settle in with the crowd and ignited a cheering frenzy from the Kentucky contingency who had made the drive down from Western KY to watch Porter and Jennings compete. The Walker Brother gracious both congratulated Porter and Jennings and stated that they two teams had become friends over the last couple of years and added “If they couldn’t win they were happy to see them take the honors.”

Coming in third with an equally impressive sack was the team of Luke Glasscow and Gavin Hays from Alabama’s Marion County High School. They had a limit that tipped in at 20lb 14oz.

Finishing just behind them was the team of Wesley Holt and Colby Miller from Oak Hill High School in Louisiana. Their limit weighed 18lbs 10oz to claim the number 4 spot in the event.

Just three ounces behind was the team of Isaac Duncan and Jack Kelly from Mississippi’s North Pike Fishing team. Their sack weighed 18lb 7oz to round out the top five.

Special thanks go out to the City of Florence Alabama and the Lauderdale County Extension Office for once again being a terrific host for the event which saw teams from 22 different states travel to the scenic river town which has a terrific music history as well as a wide array of family attractions.

The Florence Fire and Rescue boat also provided an invaluable service in getting anglers with engine trouble off the water during the event.