The City of Jonestown, Texas and Jones Brothers Park hosted the second FAN HSF qualifier on Lake Travis, October 29. We were blessed with a beautiful fall day with morning temperatures in the mid 60’s and mid 80’s for the afternoon weigh-in.
Sixty-two teams ascended onto Jones Brothers Park for the second tournament of the season and a chance to qualify for the Chase for the Championship with over $6,000 in Scholarship funds and the coveted Berkley Select Anglers of the Year Award.

CHECK OUT THE LAKE TRAVIS WRAP UP ON FAN TV HERE

Parker Wagner and Cameron Reagon from Lake Travis High School take back to back victories with another win on Lake Travis with only 3 bass including the 7.26 pound Kistler Big Bass for a total weight of 10.97 pounds and currently lead the Berkley AOY chase. 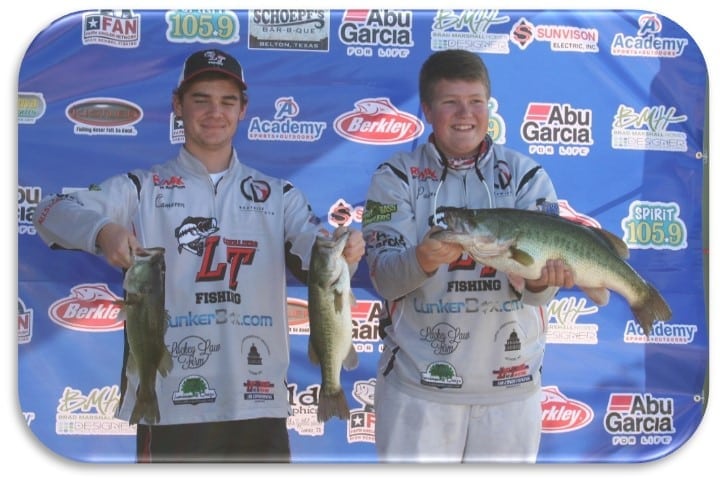 “Because Lake Travis is our home lake, we were able to pre-fish quite a few times,” Wagner said.  “We found that most of the fish were staging on main lake points with shelves and hitting topwater spooks any time of the day. Tournament morning, we were confident in the spook and the spots we had found, but after throwing the spook for about an hour, we had only caught one keeper and knew that we had to change our approach.

So, we switched to a Texas rigged beaver tail craw and fished wind-blown points that we had found pre-fishing” Wagner continued. “One of our first bites on the craw was the 7.26 pound bass that was on a spot that we knew had good fish on it. The day really slowed down after that, we caught lots of 13.5 in. bass, but none over 14 until 20 minutes before weigh-in.

We ended the day with only three keepers in the well, but one of them was a kicker. Cameron and I were fortunate enough to win the tournament, but at the end of the day we need to give the glory to God and be thankful for the opportunity that he has given us. Thank you to Faith Angler Network for hosting the event and to all of our sponsors who make these amazing opportunities possible,” Wagner concluded. 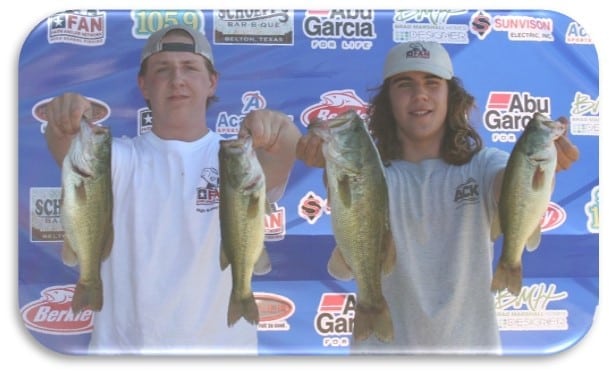 Coming in third from Magnolia West HS was the team of Aaron Batten and Trevor Don with four fish at 9.48 pounds. They each won a large Berkley PowerBait Tackle Bag and a pair of third place trophies. 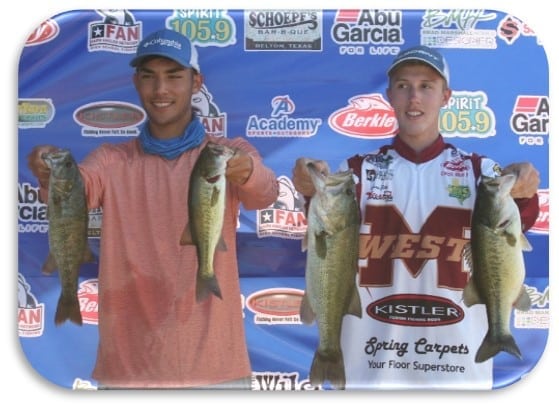 “We caught over 40 fish that day but the hard part was getting bigger fish,” Batten said.  “We started off the day fishing in a creek about half way in. Within the first couple of casts we immediately started to get blow ups. I was throwing a topwater popper with an Ardent Apex Tournament reel. The fish would come up schooling all around us, but what we found was that the bigger fish seemed to be hanging around the flood bushes in shallower water.

We got our first three keepers by 8:30am,” Batten continued.  “Then, after the topwater bite shut off it was a struggle. We kept catching fish on pretty much anything. I caught a few on the Gambler Lures Super Stud White Lightning. Then, we started fishing floating marinas throwing slow sinking type baits. I was throwing a wacky work and my partner was using a weightless senko Texas rigged.  The fish were suspended right under the floating pilings; that’s how we got our 4th keeper for the day.

We wouldn’t have been able to fish this tournament if it wasn’t for Meeks Outboard Services. Our motor had a small oil leak and we took it to those guys and they did a great job on working with us to get the boat back in time for the tournament,” Batten concluded.

This event would not be possible without the volunteers and staff that put everything together, from helping check in, set up, cook hotdogs, launch boats, park trucks, merchandising and getting it all back into the trailer. Thank you sincerely: Justin Rieger, Mary Anderson, Colt Anderson, Doug, Valerie and CJ Cruts, Jon Sigman, Stephanie Cook, John Hyndman, and the many others that jumped in to assist.

We’d also like to thank all of our 2016/17 Sponsors and Supporters and ask that you give them a chance to earn your business when the opportunity arises.