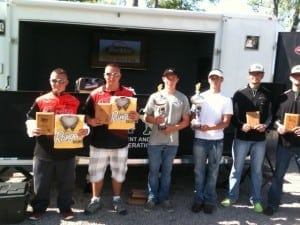 Joe Edwards and Austin Boyette put together a five fish limit of Kerr Lake bass that weighed in at 10 lbs 10 oz. to win the North Carolina High School State Championship.

With last year’s defending champion Kristopher Queen fishing in the High School National Championship on Beaver Lake, the field was wide open and the pair of East Wake High School Seniors capitalized by using a bubble gum colored floating worm. “We got hot early this morning and caught three keepers right off the bat,” commented the two. “We then hit a little slow period before we got back on them in the afternoon. We caught 9 or 10 keepers today along with a few short fish so we had a pretty good pattern going.“

The pair also credited their success to having fished an adult tournament on the same lake two weeks ago as a big part of their success. “We learned a few things at that event and we finished 14 out of 47 boats, so we had a little confidence coming in,” stated Boyette. “This was our first SAF tournament and this was just awesome,” added the duo who fished pretty close to the Nutbush Park ramp area most of the day.

Nutbush Park was recently renovated and provided a terrific setting for the event that was hosted by the North Carolina TBF staff. The new facility along with Vance County’s great hospitality will most certainly make this a popular spot with tournament anglers across the country.

Finishing in second with another five fish sack was the team of Tyler Dunn and Brandon Mathews of Beddingfield High School who had 9 lbs 5 oz limit of their own. Rounding out the top three was the duo of Allen Johnson and Ryan Underwood who also had a limit of bass that weighed in at 9lbs 2 oz.

Edwards and Boyette will now advance on to the Southeast Conference regional in October at Lake Lanier in Gainesville, Georgia. “We are really excited about the opportunity to fish against some of the best anglers in the country added the pair.”

The SAF state championship series continues across the country with upcoming events in Georgia and Missouri on tap in the coming weeks. To see the complete High School Schedule go to highschoolfishing.org where you can also register this week for the High School Fishing World Finals.