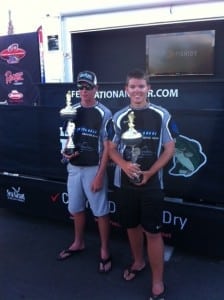 Brandon Branch and Hunter McPherson were the last boat out in the 42 boat filed for Saturday’s Florida SAF High School State Championship but that didn’t stop the talented pair from bringing in a whopping 24lb 4oz sack to win the SAF Florida State Championship on legendary Lake Toho. The big bag was anchored by the Lew’s big bass winner a 7lb 4 oz toad and a very respectable 6lb 10oz running mate that propelled to the smiling pair to outdistance the runner-up team of Corbin Smith and Stephen Soileau from the Osceola Angler group who had a very respectable 19lb 110z bag that was also anchored by a 6lb 7oz kicker. Branch and McPherson also claimed the Booyah Big Bag award for the day which is awarded to the team with the largest one day catch in the SAF State Championship series.

Finishing third was the team of Jeremy Morgan and Trevor Waltz from Bartow High School who also had an impressive 19lb 4oz bag that carried with it a 7lb 2oz beauty. The final regional qualifying spot went to Pine Ridge High School’s Trevor Brown and Nick Sutton who had 15lb 14oz’s to edge out 5th place finishers Tyler Woolcott and Parker Meadows from Spruce Creek High School who brought in 15lb 7oz to the Big Toho Marina weigh-in area. 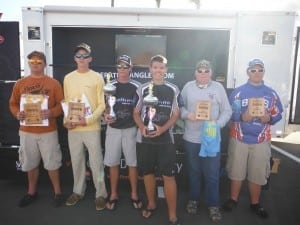 “It’s a little hard to believe this but yesterday we pre-fished in the exact same spot where we caught the bulk of our fish today and we did not have a bite” cited McPherson. “Today we primarily used a Chatter Bait and for some reason they decided to bite” added Branch who also felt that the key to the team’s success was the fact that they didn’t give up on their primary spot. “We knew those fish were in that area so I’m sure glad we stuck with it and went back there first thing this morning” added the smiling pair. 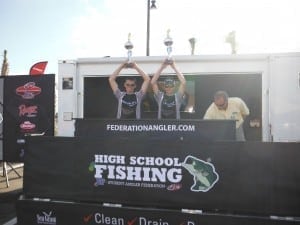 Go to highschoolfishing.org and click on “State Championship” to see all the SAF events around the country.