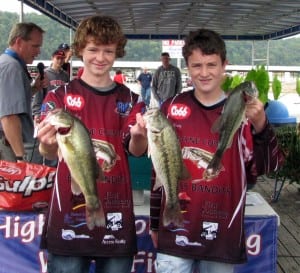 Sixteen two person teams launched their boats on Saturday morning as a cold front arrived with a stiff northeast wind that didn’t exactly help the already tough conditions on the lake. But as always youth did prevail and the team of Bradley Dunagan and Trey Hardwick representing the host team brought three fish to the scales that weighed in at 6 lbs. 4 oz. to win the inaugural event. 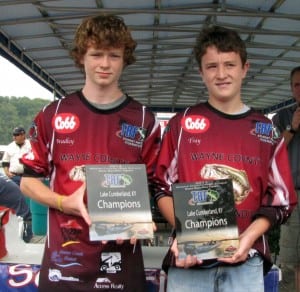 The young duo were pretty tight lipped about how they caught their fish in anticipation that next spring’s KHSAA High School Regional might very well be on this same lake! When asked what caught their fish on the pair just smiled and said, “that’s a secret for right now.”

The anglers were all treated to a cookout at Friday night’s registration/rules meeting hosted by the Wayne County Extension office and several local sponsors. There were also several door prizes given to all anglers who participated in the event, along with a gift card drawing for participating volunteer boat captains.

“We are very pleased with the turnout for this event,” stated Wayne County club advisor Ricky Kempton. “This program is only going to grow from here and we are happy to be a part of the whole movement to get students across the state involved in the great sport of fishing.”

The event brought a nice crowd to Conley Bottom Marina, who served as hosts for the event. Also in attendance were administrators from other schools in the state who are anxious to see what lies ahead for Kentucky students as they embark on High School fishing as an approved sport next spring.