Jake and Josh Dugger were torn with a decision to either play in a local basketball tournament or fish the TBF/FLW Grand Lake Open on Saturday in Grove Oklahoma. They decided to enjoy the spring weather and fish and it was probably one of the best decisions they could have made. The identical twins and their Boat Captain, who is also the Superintendent of schools as well as being their dad, made the trip from their River Valley Bass Club in Northwest Arkansas across state lines into Oklahoma. They were the first to leave the dock in the morning as they led the 29 boat field out of the Wolf Creek Launch Ramp marina and they never looked back as they put together a terrific 5 fish limit of 20lbs. 1 oz. to win the event as well as securing a qualifying spot in the TBF/FLW Southern Conference Regional Championship in October. 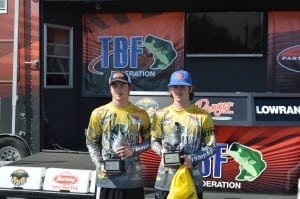 Also having a banner day was Cameron Pappan from Winfield High School in Kansas who also ventured south into Oklahoma and put together a terrific 5 fish limit that we weighed in at 16lb. 15oz to finish second and also pick up one of the three qualifying spots available in the event.

Rounding out the top three were Trevor Yates and Jacob Keenum who also brought in a very respectable 5 fish limit that tipped the scales at 13 lbs 9oz. 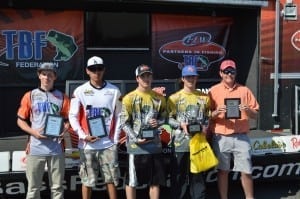 With all of the anglers fishing in the wake of the TBF Adult National Championship which was held the three previous days as well as a stiff southwest wind, the conditions were less than ideal.

“We kind of just stumbled into them stated” the Duggers. “The amazing thing is that we probably caught as least three limits of fish today and all of them would have been over 15 lb. bags” stated the grinning pair. “It was just one of those days”!

The TBF/FLW High School State Championship is now in full swing with events happening every weekend in some particular state added the winning team.

To view the upcoming schedule contact Highschoolfishing.org and then scroll down to your state.