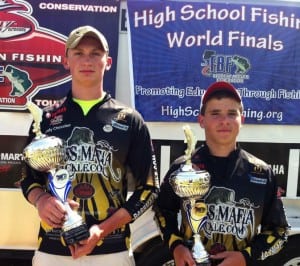 Lake Maumelle (Little Rock, Ark) 5/7/11 -Record-setting flooding in Arkansas had put about a third of the state underwater, making the event moved from the Arkansas River to Jolly Roger Marina at Lake Maumelle. The weather did a 180 with bright sunny skies on Saturday and was very cooperative with the first ever Arkansas High School Fishing State Championship event.  A total of 71 teams registered to fish this inaugural event.

“This is awesome, we never though we had a chance coming to this event and seeing all the teams that were here, so this is quite a surprised,” said Goates and Chessher. “We found a bank that was holding a few fish, so we just wore it out all day and we caught nearly all our fish off that one bank.” The team weighed in 5 bass that weighed 12.25 pounds. “We knew we had a nice bag, but figured we would maybe get into the top 15 and possibly the top 10, but never did we dream that we would win! We would like to thank our boat captain, Rex Rose, our parents, along with the Scheides for getting our club started and organizing things for us.”

The team was also a ‘Certified Student Angler’ team, meaning they had taken the online SAF quiz on boater safety, angler ethics and invasive species. By being the highest finishing Certified Angler team, they won a set of inflatable life jackets, sponsored by the Arkansas Game and Fish. For more details on the SAF angler testing component, visit our SAF quiz page.

Finishing in second place, was North Pulaski High School Falcons John Ball and Kendall Long. They weighed in a limit of fish that weighed 11.92 lbs, just about .3 lbs shy of the champs. Third place team came from Bryant High School, Chase Melton and Greg Womack. They were not far from the second place team with 11.65 lbs.

The Dover Youth Fishing Club, who is also mentored by FLW Tour Pro Ray Scheide, brought a total of 11 teams from their club to compete. See their club spotlight here. Another school that brought great presence was White Hall High School which is south of Little Rock, near Pine Bluff. Their school brought 16 teams to the state championship! Other schools represented where Sheridan High School, Greenbrier, Episcopal Collegiate, NLR Charging Wildcats, Mayflower High School, among several others. There was a great presence at this first tournament.

Each team that competed is now qualified to enter the 2011 High School Fishing World Finals held in July in Russellville, Ark., with no entry fees.

TBF and SAF would like to thank the City of North Little Rock, Arkansas Game & Fish Commission, Tennessee Bass Federation President David Daniel, TBF Board Member Charlie Mitchell and all the volunteers who helped make this event happen, despite the weather conditions. The Tennessee Bass Federation still made the trip with the weigh-in equipment, which had to make a long detour when I-40 was closed on Friday due to flooding. And a huge thank you to all the parents, mentors, teachers, coaches and boat captains for getting your students involved with high school fishing! Thank you all! We couldn’t do this without you.