Two For Two, Walker Brothers Continue To Pace The Field

Limits abound with over half the field bringing in a five fish limit.Deja vu

At Tuesday nights registration another record crowd, we handed out all 1500 wrist bands we had printed( and had to borrow more locally!) for Friday nights pizza party scheduled for the nearly 600 participants (2 anglers, boat captains per team) and their family attending the week long world finals event from 22 states. Deja vu.

And for the second year in a row, the day 1 weigh in concluded with brothers Cole and Court Walker pacing the opening day field at beautiful Pickwick Lake in Florence Alabama. The pair from Tennessee’s Hardin County High school brought in a five fish limit that rocked the McFarland Park weigh-in stage with a 26lb 7oz effort to secure the top day 1 spot amidst the field. 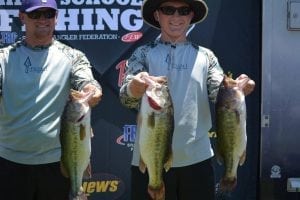 Right behind them was Nathan Stamper and John Lusk from Columbus Christian Academy in Indiana. Their limit tipped in at 21lb 2oz to hold down the runner-up position. Their bag was anchored by a 9lb 1oz Pickwick whopper that was also the day’s biggest bass and currently leads the Lew’s Big bass award. 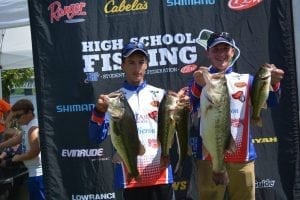 Claiming the number three spot was Blayke Haggard and Kolby Frazier from Oklahoma. 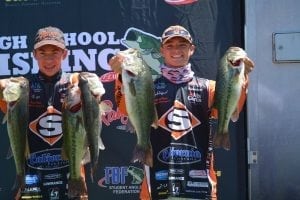 Their limit weighed 16lb 15oz to edge out Lawrence County Tennessee’s Drey Long and Austin Clanton who brought in a 16lb 14oz bag that has them sitting in the fourth position.

Rounding out the top five was the duo of Logan Parks and Lucas Lindsay from Auburn Alabama. Their limit tipped in at 16lb 4oz for the day.

In the most unique format if all of tournament fishing and patterned after most other high school sports tournaments, the top two teams from each state advance on to Friday’s semi-final competition while the rest of the field drops into a consolation round in an attempt to fish their way to Saturday’s 21 team final round.

Day two of the four day event will kick off at 5:30am tomorrow at McFarland Park. Weigh in begins promptly at 1:30 pm and is free to the public.

For full standings check out the results page HERE