Today was a busy day at the 2014 High School Fishing world finals in Russellville Arkansas as the top 2 anglers from each state went out in the semi-final round and the rest of the field went out in the consolation round.  The one of a kind format for the High School Fishing World Finals ensures everyone has a fair chance very similar to a double elimination round in most high school sports. Just like in those sports you must win to advance and here you must catch fish to advance.

After today s semi-final and consolation rounds, the top 10 anglers from the semi-finals automatically advance to the finals on Saturday. The next 10 anglers to fill out the 21 team final field is selected from the overall weight standings for the day. So, if a consolation round team can somehow manage to catch enough weight to finish ahead of a semi final team they push their way into the finals and push the lowest placing semi final team out. The last spot, the 21st spot will be filled at tonight angler celebration party in a “Lucky Dog” drawing. all teams NOT currently fishing will be entered into a drawing and one team will be drawn to go back into the finals!  Those “Lucky Dogs”!

Today the consolation round felt the weight of a short day and having to come form behind and they put that to good use and applied massive pressure on the semi-finalist with some of the days biggest bags. 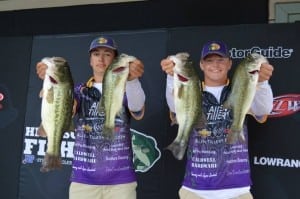 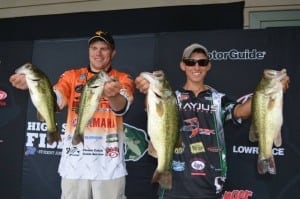 On the semi final side, Austin Dupree and Kyle Dragulski from Texas SAF had no let up in them as they weighed in 15-00 even. Finishing in second in the semi’s was Devon Fuller and Austin Matnor from Broome HS Centurions in South Carolina.

Started by The Bass Federation (TBF) in 2009 to serve all high school anglers in every state or country who wish to participate, The Student Anglers Federation (SAF) is the founding program for all of high school fishing. SAF and our partners in fishing and all things high school at FLW Outdoors continues to lead the charge to get more young people involved in fishing.  SAF conducts or sanctions more than 100 events each year in every state as well as Canada and has touched more than 10,000 participants so far in 2014. SAF offers something for all skill levels and more than just fishing with free online training courses for all SAF members that are based on based on math, science and language arts and why they are important to fishing.  The Student Angler Federation is proudly sponsored by FLW,  Cabela’s, Ranger Boats, Evinrude Outboards, Chevrolet, Berkley, Fishidy, Motorguide, Lowrance, Lews, Solar Bat, Booyah! and The Bass Federation (TBF)