So when day 2 dawned to cloudy and overcast conditions on Lake Dardanelle in Russellville Arkansas today after yesterdays sunny blue bird skies the day 1 leaders knew they had to step it up and they were correct. Five fish limits were plentiful for the World Championship anglers today.

However, this is a fishing event and no one gets a free ride, you must catch fish to advance and all the anglers who did not finish in the top two from their state after the first two days are pushed into the consolation round in an attempt to unseat some of the semi-final round anglers and get back into the finals.So it is not a free ride for the semi finalists, they must catch fish each day or risk getting unseated, by someone clawing their way back in. Semi-final anglers go out first and weigh in last, consolations round anglers go out last  and  come in first.

After Friday’s semi-final and consolation rounds are tallied on Friday, the top 10 anglers from the semi-finals automatically advance to the finals on Saturday. The next 10 anglers to fill out the 20 team final field is selected from the overall weight standings for the day. So, if a consolation round team can somehow manage to catch enough weight to finish ahead of a semi final team they push their way into the finals and push the lowest placing semi final team out. 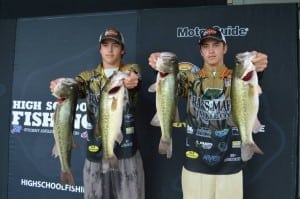 Leading the event and their home state of Arkansas is Jake and Josh Dugger from the River Valley High School Fishing Team. Only once in the five year history of the High School Fishing World Finals has a home state team won the event, could this be a second time? The next two days will tell the story but the Dugger boys have a track record of winning High School events, they know how to win and sometimes that is the edge that is needed.   Regardless it is a good feeling to go into the semi finals leading the event even if the weights are zeroed for tomorrow, they must beat half the semi final filed to even get a shot at the finals so it is a long way from over yet as the semi finalists and any of the other teams not finishing in the top 2 from their state and want a shot through the consolation round take the field tomorrow. 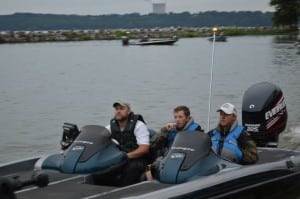 Started by The Bass Federation (TBF) in 2009 to serve all high school anglers in every state or country who wish to participate, The Student Anglers Federation (SAF) is the founding program for all of high school fishing. SAF and our partners in fishing and all things high school at FLW Outdoors continues to lead the charge to get more young people involved in fishing.  SAF conducts or sanctions more than 100 events each year in every state as well as Canada and has touched more than 10,000 participants so far in 2014. SAF offers something for all skill levels and more than just fishing with free online training coursesfor all SAF members that are based on based on math, science and language arts and why they are important to fishing.  The Student Angler Federation is proudly sponsored by FLW,  Cabela’s, Ranger Boats, Evinrude Outboards, Chevrolet, Berkley, Fishidy, Motorguide, Lowrance, Lews, Solar Bat, Booyah! and The Bass Federation (TBF)