19 pounds and 1 ounce leads the pack! 2 members of the River Valley High School Fishing Team, Colten Aday and Jake White brought in a impressive limit of bass that weighed in at 18-05, then added 12 bonus ounces for completing the optional online certification courses SAF offers on such items as boater safety, angler ethics and  aquatic invasive species, they bumped their day 1 total to 19-01 and put them solidly in the lead going into day 2. 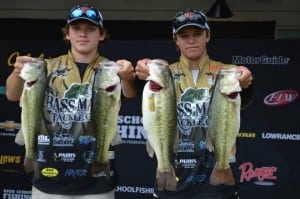 James Ingram and Chase Galloway form Arkansas SAF sit in second place with 16-12 ounces and the Texas High School fishing team of Austin Dupree and Kyle Dragulski are in third with 15-07.

The High School Fishing World Finals unique format means for now the anglers are most concerned with other teams from their home state, for now.

After the first two days of competition only the top two anglers from each state advance to the semi-final round on Friday, this puts the very best anglers from each state on a even playing field to make the semi final round and a “leg up ” on making the finals, all weights are zero’ed after the first two days.  However, this is a fishing event and no one gets a free ride, you must catch fish to advance and all the anglers who did not finish in the top two from thier state after the first two days are pushed into the consolation round in an attempt to unseat some of the semi-final round anglers and get back into the finals.So it is not a free ride for the semi finalists, they must catch fish each day or risk getting unseated, by someone clawing their way back in.

After the semi-final and consolation rounds are over on Friday, the top 10 anglers from the semi-finals automatically advance to the finals on Saturday. The next 10 anglers to fill out the 20 team final field is selected from the overall weight standings for the day. So, if a consolation round team can somehow manage to catch enough weight to finish ahead of a semi final team they push their way into the finals and push the lowest placing semi final team out, so it is a battle to the end!