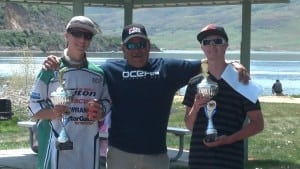 HEBER CITY, Utah  (May 13, 2012) – Five teams took to the water on Mother’s Day, May 13, 2012, competing in the Utah & Wyoming High School State Championships at Deer Creek State Park in Heber City, Utah. Mother’s, grandmothers and bass fans lined the ramp to cheer on their favorite team at the blast off. The Bass Federation in partnership with FLW Outdoors held the event for eligible high school students from across both states as a qualifier for the High School National Championship to be held in 2013.

After a successful day of practice the day before, where the team of Burn & Hall boated a 4 pound 2 ounce largemouth. The angling duo of Conner Burn and Austin Hall of Murray, Utah fished the tournament with one goal in mind, catch one fish at a time. With Austin Hall striking first thing in the morning using the subtle approach of a Yamamoto Senko, the two continued to “burn and hall” their way to the top spot. Conner Burn said, “I used a Beaver on a 3/16 ounce tungsten bullet weight. I would just let it fall slow and then after a few seconds, I would burn it back. That’s when they would bite. We had a blast! “.  “A good day of practice pays off,” recalled the team’s coach Jody Wise.

Runner-up State Champs, the team of Correy Quintana and Seth Hausman, had 4 nice fish. Hausman said, “We just couldn’t get that last keeper.” This was the team’s second High School Championship, placing first in last year’s contest at Lake Powell. The Big Fish of the tournament went to the team of Jade Elton and Trevor Hansen with team coach Clifford Sackett. Every angler caught fish and team coach Rhett Fornof , 2011 TBF National Champion Co-Angler remembers back saying ,” Deer Creek is better than it has ever been.” A special thank you to all the team coaches and a very special thank you to the Mother’s that gave up their special day to cheer on their pride and joy’s…, their son’s.

Final Standings Were as Follows: