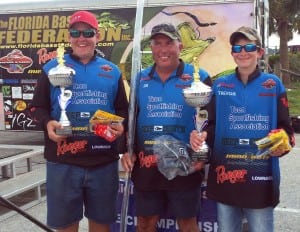 When the teams all returned to the scales, it was newcomers Trevor Brown and Austin Murray who conquered the field with a 5 bass limit that weighed 14.13 pounds to win the 2nd annual event.  This was the first High School tournament for these two anglers. Trevor Brown, who attends Pine Ridge High School, was all smiles as he thanked his dad John for getting him and his partner Austin, who is a home-schooled student, on the fish. “It was a real grind,” cited Trevor. “We fished hard all day and fortunately we got a few big bites.” The real story of this championship was that Trevor actually built the lures that the pair used to catch the winning bag. When asked if he might be interested in selling a few of those to other anglers Trevor just smiled and said, “That’s the plan!” Both anglers also said they were going back home as champions and hope to use that feat to get a high school club started in their area and bring back several more teams next year. 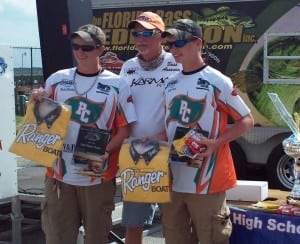 Finishing in second was the team of Michael Watkins and Bradley Trout from Plant City High School. These two anglers also brought a 5 bass limit to the scales that weighed 12.01 lbs. Both Anglers commented on the tough wind conditions and credited their boat captains for holding them on their spots throughout the day while they worked the grass beds of this legendary bass haven. “Without him we certainly wouldn’t be standing on this podium today,” stated both anglers.

The brother combination of Brian and Cody Malys from Bartow High School finished third in the event with 11.02 lbs. The pair also battled the wind all day but hung tough and capitalized on the bites that they did get to land this nice five fish limit.  The duo also credited their boat captain and thanked their school coach Mr. Boswell for helping them get started in the club and also getting to this event.

All three of these teams received additional prizes as part of the “Berkley Five Alive” program. Anglers are rewarded for bringing in a five fish limit with all five fish being alive. 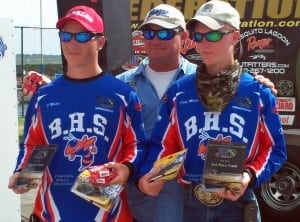 The Certified Student Angler Award was also awarded to the winning team of Brown and Murray who completed the SAF Online Testing program prior to fishing in the event.

The Brown and Murray team  will now advance to the High School Regional event that will coincide with the FLW Collegiate Regional Series in the fall. If they continue to win and advance they will eventually fish for the SAF High School National Championship where they will compete for $10,000 in scholarship money.