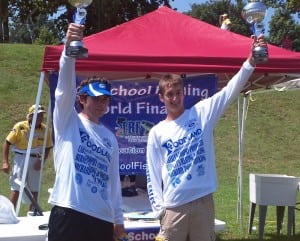 The Ohio High School State Championship took place on the Ohio River in scenic Gallapolis, Ohio.  Sixteen teams blasted off on the morning of July 9th and all but three brought back fish to the scales that afternoon.  With the assistance of several members of the Ohio Bass Federation, an Ohio Champion was crowned.

Zach Blanton and Winston Wade representing the Gallia Academy Blue Devils are your 2011 Ohio High School State Champions.  They weighed in a five bass limit weighing 7.25 pounds which included the big bass of the tournament, a 3.26 smallmouth bass.  They caught a limit of small keepers during the early morning hours and kept culling throughout the day.  When asked how it felt to represent Ohio as the first ever high school champions Zach Blanton exclaimed, “This feels amazing and we really couldn’t have done it without our boat captain, Coach May”. Blanton and Wade will advance to the SAF Northern Regional to be held in conjunction with the FLW College Fishing Northern Regional which will be September 3rd on Sayers Lake in State College, Pennsylvania.  Also, that event’s weigh-in will take place on the campus of Penn State University. 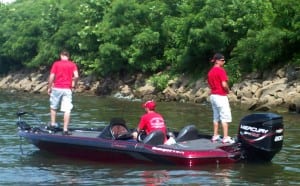 Only one hundredth of a pound separated the anglers placing second and third!  Representing the South Gallia Rebels in second place were Corey Burnett and Jeff Combs who weighed in a limit of fish that weighed 5.77 pounds.  Taking third place honors were Jack Turner and Billy Powers who weighed in a five fish limit of 5.76 pounds.  These student anglers were also members of the Gallia Academy Blue Devils.

TBF’s National Youth Director Mark Gintert commented, “There is no doubt that the work ethic these kids have shown in the classroom has paid off here today. The anglers that finished well in this event definitely put the time in and did their homework on this body of water”.  All three top finishing teams brought a limit of healthy fish to the scales so they all qualified for a new incentive program called Berkley Five Alive.  Each team received packages of Berkley soft plastic baits to add to their tackle collections. Berkley has put this program 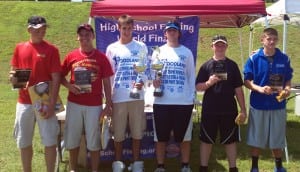 in place to emphasize the conservation efforts of all of our Student Angler Federation participants who bring five living bass to the scales during any SAF event.