TEKAMAH, Neb. — The ingredients were all there.

Summit Lake, one of the best bass fishing sites in the region.

A break in the summer’s siege of 100-degree temperatures.

The result: A tough day on the water for just about everyone — except Zach Madsen and Matt Neiburg of Blair. The Blair High School seniors won the state championship Saturday with a four-fish total weighing 9.01 pounds. They outdistanced runners-up Drew Urbanovksi of Roca and Ian Malmstrom of Lincoln, who weighed in three fish, by 3.19 pounds.

“It was a tough day,” Neiburg said. “Normally this lake is a lot better and you catch a lot bigger fish. Pretty slow.”

The fishing buddies won the tournament on fish caught with crankbaits. They lost one that Neiburg estimated weighed more than 3.5 pounds on a Wacky Worm, a soft plastic lure.

“We caught all the small fish on Wacky Worms,” Neiburg said. “No keepers there.”

Summit Lake is a flood-control reservoir built in the hills above Tekamah in the 1970s. The fishery was renovated in 2001 and now includes bluegill, largemouth bass, crappie, walleye and channel catfish.

It consistently rates as a top spot for largemouth bass. Sixteen Master Angler largemouths have been reported out of Summit since 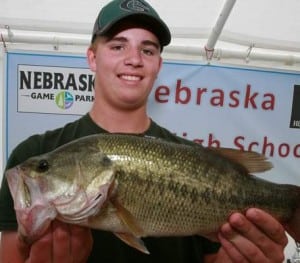 Neiburg said he caught an eight-pound, 23- to 24-inch bass at Summit during the spawn two years ago.

Don Gabelhouse of Lincoln, the Nebraska Games and Parks Commission fisheries administrator, blamed a weak cold front that passed through the area Friday for the change in fishing fortunes.

“Chalk it up to changing weather,” he said. “This was a tough bite. Kids who pre-fished this and did well, didn’t do too well today.”

Last year’s inaugural state champions, Drew Bailey and Adam Diehl of North Platte, split up and fished with different partners this year. Their teams didn’t catch one fish big enough to weigh in.

They weren’t alone. Nine of the 16 teams didn’t qualify for the weigh-in.

Tournament rules followed size regulations for Summit Lake. Anglers could only keep fish at least 15 inches long. No more than one could be longer than 21 inches. Team members were allowed to possess five fish apiece in their boat’s live well and weigh in the five heaviest.

An hour into the tournament, Gabelhouse and Game and Parks fisheries staffers Tony Munter of North Platte and Jeff Schuckman of Norfolk canvassed the lake boat to check on fishing success.

“We’re a late-hour team. Come back at noon,” hollered Kent Priel of North Platte, who was at the helm of the boat with teammates Dejon Roberts and Tel Pyzer, both of North Platte.

By mid-morning, however, Pyzer already had a 16-incher to show off. The team eventually finished fourth, just a few ounces out of third place.

Down the shoreline, Bruce Dreessen of Papillion gave a pep talk during the morning lull to the anglers in his boat — Connor Pudenz and Andrew Phelps — that was loud enough for other competitors to hear: “We’re soon to be state champions! See you on the podium!”

Across the lake, Urbanovsky pulled in his first keeper of the day, a bass a bit longer than 15 inches caught with a Baby Brush Hog lure along a rock jetty.

Nearby, Madsen and Neiburg were quietly fishing in seven feet of water over a hump in the lake bottom.

Gabelhouse said the commission is optimistic that an annual state high school fishing tournament would recruit more young people to the sport. Participation in fishing among young people has been declining across the nation.

The commission’s introductory Family Fishing Nights in communities across Nebraska are popular, but mostly among families with young children.

“We’ve noticed that high school kids avoid Family Fishing Nights like the plague,” Gabelhouse said. “Kids that age like to compete. This gives them an opportunity to do that and do something new.”

The tournament was organized by Game and Parks and Nebraska members of The Bass Federation.

Madsen and Neiburg’s victory qualifies them to compete in the regional tournament in October.